Bauer further noted that the NATO-Georgia package was enhanced to ‘improve the interaction between Georgia and the different parts of its command structure, strengthen its maritime component and focus more on resilience.’

He also notes that the NATO Military Committee in Chiefs met with both Georgian and Ukrainian partners during the meetings, discussing security issues in the countries and ‘ongoing progress with defence-related reforms.’

Next, #NATOCHoDs recognized the impressive reforms ???????? has implemented + enhancements of defence capabilities through the Substantial #NATO-Georgia Package.

Both partners are benefiting from unprecedented support and assistance from NATO. We want to ensure they have all the necessary tools to not only ensure their own security but also further contribute to European security,” Bauer said.

He noted that in both sessions NATO reiterated ‘its unwavering support for Ukraine’s and Georgia’s territorial integrity and sovereignty.’ 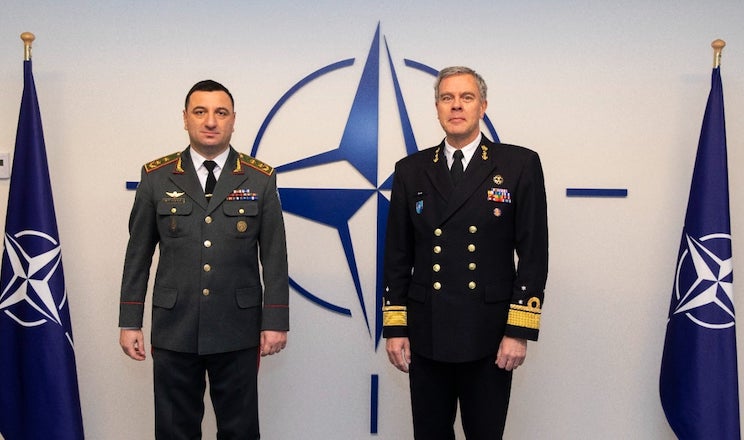 The ministry states that Russian military provocations in the Black Sea and Caucasus region and growing militarisation were on the agenda of the meetings as well.

Bauer also stated that NATO is facing the most complex set of challenges in a generation, adding that ‘Russia is more aggressive abroad and more oppressive at home.’

However, he underscored that despite significant differences between NATO allies and Russia it is a ‘positive sign’ that they ‘sat down around the same table and engaged on substantive topics.’

This is an opportunity for constructive engagement which should not be missed in the interest of security in Europe,” Bauer added.

Meetings of the NATO Military Committee took place in Brussels on January 12-13.