Police have made arrests on Rustaveli Avenue in Georgia's capital, where a protest involving political opposition and independent citizens against the July 5 violence is being countered by a rally of right-wing groups involved in Monday's incidents against Tbilisi Pride organisers and reporters deployed to cover it.

A large demonstration involving political party figures, activist organisations, Tbilisi Pride organisers and independent citizens started at 8pm local time outside the Parliament of Georgia, to protest the violence against journalists and storming of Pride organisers' offices the day before.

Police are seen making an arrest from among the radical groups attempting to cross their barriers and initiative violence on Rustaveli Avenue:

A counter-demonstration involving right-wing groups was staged in parallel, across the street, starting in the evening, with a line of police and their barriers separating the two demos.

Journalists on the ground have reported "tens" of arrests made by police among the right-wing demonstrators, as sporadic incidents have been reported since an InterPressNews reporter was attacked earlier in the day by unidentified individuals from the groups.

Law enforcement have been reported to have made "tens" of arrests during the evening among the groups attempting to break through law enforcement lines and into the opposing demonstration on Rustaveli Avenue:

The media professionals have also reported observing attempts from the counter-rally of conservative groups to overcome the physical barriers erected by the police and enter the territory designated for the opposite demonstration.

Items being thrown from the counter-protest has also been observed, with water bottles and other objects directed at the main rally reported by the journalists on site. 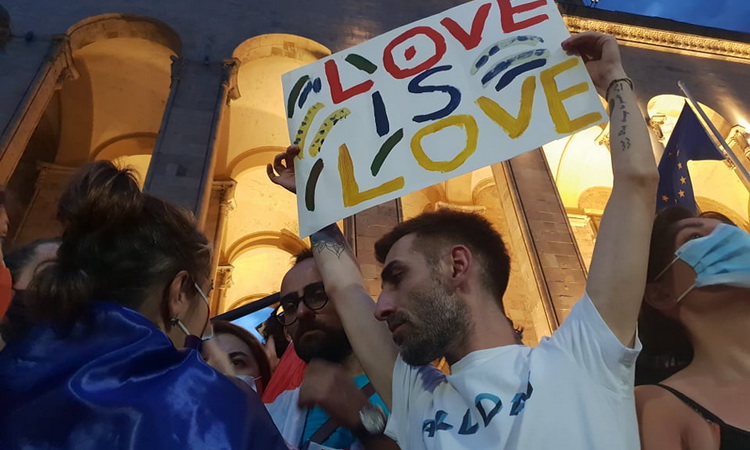 Citizens and queer activists, including Tbilisi Pride organisers, seen among the main demonstration outside the Parliament of Georgia on Tuesday. Photo: Nino Alavidze/agenda.ge.

The protests follow developments on Monday, when right-wing groups gathered outside the parliament building to prevent the Tbilisi Pride march, a closing event of the week-long programme for highlighting queer rights, from taking place.

After the violent attackers left the reporters injured and stormed the Pride organisers' offices, the LGBTQ activists announced the march would not be held on Monday.

A view from the protest involving political parties, activist groups and independent citizens gathered outside the Parliament of Georgia:

Their announcement included sharp criticism of "shameful" comments from Prime Minister Irakli Garibashvili about the Pride event and "inaction" from the interior ministry in protecting its participants.

Garibashvili had said holding Tbilisi Pride was "not reasonable" and could "lead to civic confrontation", while head of the ruling Georgian Dream party Irakli Kobakhidze alleged the queer event represented "the interests of the United National Movement radical opposition and their partner parties".