Violent right-wing groups took over the protest space outside the Parliament of Georgia and burned the European Union and LGBT  flags, after the peaceful rally against violent events of the previous day, as well as media crews, were escorted by law enforcement away from Rustaveli Avenue.

After hours of tension, attacks by the right-wing groups on police, and injuries caused by rocks and pieces of iron bars thrown from their ranks in direction of law enforcement and the silent protest across the road, the developments of the night seemed to have come to a close.

With participants of the solidarity rally - which included political opposition, independent citizens and queer activists - having left the space outside the parliament venue, and journalists having been moved by officers away from the site, the aggressive groups of the counter-demonstration again took over the location.

Right-wing agressive groups occupied the space in front of #Georgia's Parliament building in #Tbilisi. They took down the EU flag and have burned it. pic.twitter.com/WmuSU7PPTI

They removed the EU flag - raised by the solidarity rally - for the second time in two days, with footage and reports indicating it being burnt on the site. A brief footage of a piece of fabric burning on the steps leading to the parliament venue also showed a protester cheering and wishing the same fate to queer individuals.

Even though police were seeing donning riot gear earlier in the night, and footage from Rustavi 2 channel showed law enforcement vehicles equipped with water cannons entering the avenue, there was no dispersal of the right-wing demonstrators using these means during the night.

Participants of the solidarity rally had asked the police to use riot units against the violent groups that repeatedly attempted to break through police lines and physical barricades and enter the territory designated for the protest involving queer activists. 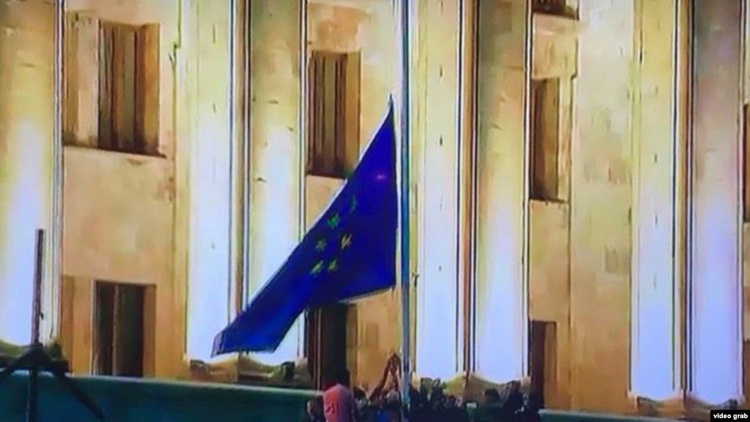 The European Union flag is seen being lowered on a pole outside the parliament venue after the violent groups take over the protest spot late in the night. Image via Georgian service of Radio Free Europe/Radio Liberty.

Police did make widespread arrests from the aggressive group throughout the night, with dozens seen forcefully taken away from the avenue in law enforcement vans.

Tuesday's events followed developments on the previous day, when the right-wing groups gathered outside the parliament building to prevent the Tbilisi Pride march, a closing event of the week-long programme for highlighting queer rights, from taking place.

After their violent attacks caused injuries to around 50 reporters present on the scene to cover the demonstrations, the group also stormed the Pride organisers' offices. As a result, the latter announced the march would not be held on the day due to safety concerns.

The subsequent citizen rally in solidarity with the injured journalists and queer activists started on Tuesday on the avenue, with the counter-demonstrations also launching their action against the former in the evening.