A total of 53 representatives of various media outlets have been injured while covering the rally of right wing activists against the Tbilisi Pride march that was scheduled for today, based on the Interior Ministry.

Mediachecker had previously reported that there were 47 journalists injured.

A polish journalist was also attacked today while he was performing his professional duties. He was transferred to Aladashvili Clinic with chest injuries.

A Palitranews cameraman who was attacked by  right wing activists earlier today has undergone an operation at New Hospitals and is being taken to the med ward at this time. 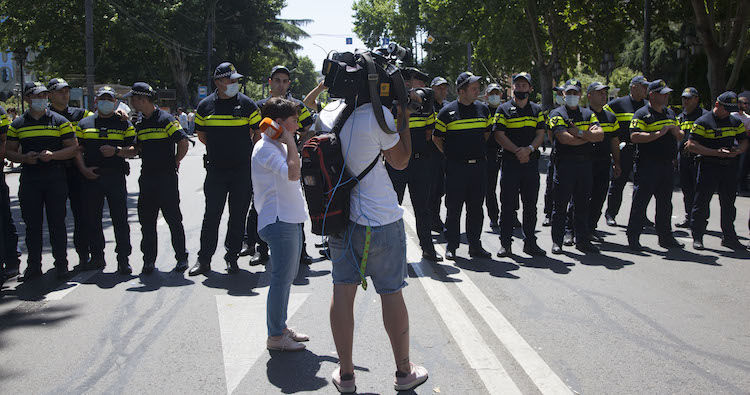 Rustavi 2 announced it will not cover events organised by right-wing groups starting today, amid the violence against journalists at the Tbilisi Pride march counter rally. Photo: Nino Alavidze/Agenda.ge.

Head of the New Hospitals emergency service Mikheil Beriashvili said that the patient had a head injury and a broken nose.

In addition, there was one journalist with an injured eye ... another three journalists are undergoing examinations right now", he said.

Georgian President Salome Zurabishvili visited the New Hospitals to see the injured journalist. She expressed her solidarity towards all journalists attacked today and condemned the violence.

I visited the injured, four journalists were brought here. One of them has already been discharged, and one has undergone surgery.... we no longer know what our core values are and seem to have forgotten the tolerance that would follow us for centuries", Zurabishvili said.

A cameraman of Rustavi 2 TV is still at Aladashvili clinic with a severe concussion.

TV Pirveli has published this video on its Facebook page, showing how activists beat a journalist on air:

Some of them received medical treatment on the spot, while others were taken to hospitals.

These people came to insult us. We did not say anything to them, but one person came from behind, twisted my arm behind my back and dragged me for a few minutes",  journalist of Mtavari Arkhi Irakli Bakhtadze who has a broken arm told Rustavi 2.

Police are looking into the incident.