Senaki and Chkhorotskhu Metropolitan Shio Mujiri, who is Patriarch Ilia II’s ‘locum tenens’ has addressed the crowd at Kashveti Church after the violent attacks of the right-wing groups, that the Georgian society will again unite against LGBT activities anytime in the future.

To avoid such difficult moments that we have seen today, I think it is time for the society to start thinking on reflecting the commandment concerning the insult of religious and national feelings in the legislation”, Metropolitan Mujiri said.

Claiming that Tbilisi Pride organisers and supporters are trying to demonstrate ‘Sodomic sins' in a positive manner, he said the Georgian people and the church will never accept this.

This is the part of a large campaign which aims to distancing the nation from God, our traditions, church and degrade it. This is why we are so united today”, he addressed the crowd.

Promising to stay united against the LGBT events in the future, Shio Mujiri said he is sorry for the misconduct during the Tbilisi Pride march counter rally. He said the church condemns the violence, but added that they had ‘warned the participants of this event’.

Later the Patriarchate released an official statement saying that they ‘very saddened that people, especially the journalists, have been injured’, and that they are ‘praying for them' hoping that they will get well soon. 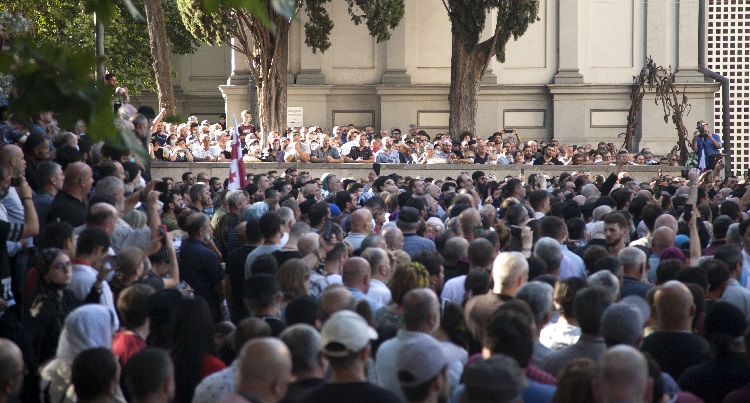 People gathered in front of Kashveti Church close to the Parliament of Georgia where the right-wing groups had been mobilised since morning to counter Tbilisi Pride march. Photo: Nino Alavidze/Agenda.ge

Tbilisi Pride, a civic movement which opposes homo/transphobia and fights to overcome it through exercising the constitutional right of assembly and manifestation, cancelled the March of Dignity following attacks from right-wing counter-demonstrators.

Calling on the population ‘not to follow deliberate provocations’, and avoid violent confrontations, the Georgian patriarchate had invited the parish to gather at Kashveti Church on July 5 for a prayer service to ‘show the world that we are defending our dignity’. 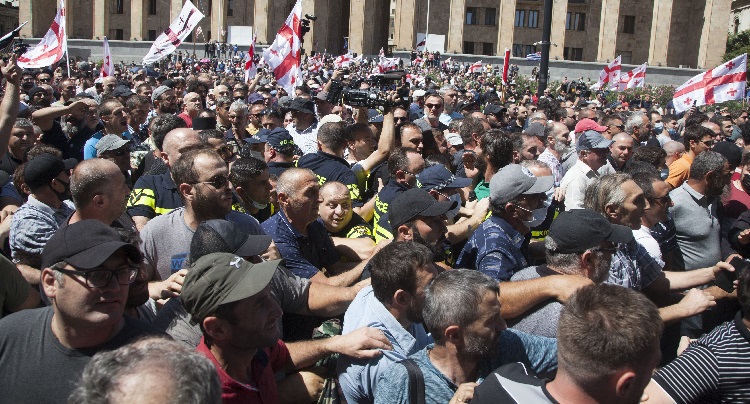 A total of 55 people have been injured during the confrontation in front of the parliament of Georgia and elsewhere, including 53 representatives of various media. Photo: Nino Alavidze/Agenda.ge

Police detained eight people for violence against journalists and attacks on the offices of Tbilisi Pride and the Shame Movement, as well as an explosion at the headquarters of a Tbilisi-based human rights organisations during the Tbilisi Pride counter rally today.