Organisers of Tbilisi Pride march have announced their cancellation of the event on Monday, citing "shameful" comments by Prime Minister Irakli Garibashvili and "inaction" from the interior ministry on ensuring safety for participants in the face of right-wing counter-demonstration in the capital.

Revealing their decision on social media, the organising group said "Pride march for #solidarity is not going to be held today", adding the government "not only did not ensure safety of the queer community and our supporters, but actively interfered with our right of assembly."

The group said developments in the run-up to the event on Monday - which included right-wing demonstrations attacking reporters gathered to counter the Pride march, and vandalising organisers' offices - had shown the government's "refusal to execute its direct responsibility."

[PM Garibashvili's comments] are a continuation of the coordinated, violent, [...] Russian policy of our political government, the Patriarchate of Georgia and pro-Russian groups

They also condemned comments ahead of the event by PM Garibashvili, who had said holding Tbilisi Pride was "not reasonable" and could "lead to civic confrontation". On Monday Garibashvili had also made connections between the queer rally and interests of former president Mikheil Saakashvili and the political opposition in the country to "spark tension and destabilisation".

War was declared against civil society and democratic values. The actions of the government have clearly shown that they don't want to perform its direct duty. The inaction of the executive power has put the health and lives of Georgian citizens in real danger. #tbilisipride21

On its part the interior ministry called on Pride march organisers to cancel the demonstration, citing "risks regarding the safety of persons involved in the event" and adding "[t]he organisers of the event have repeatedly been informed" about the threats.

Organisers of the march called the PM's comments a "shameful, violent, anti-state and anti-Western statement" that shifted responsibility to activists set to take part in the Pride event. They also said the interior ministry had "all means" to ensure safety of the week-long events of Tbilisi Pride that started on July 1 but "failed to make actual efforts for protecting fundamental human rights". 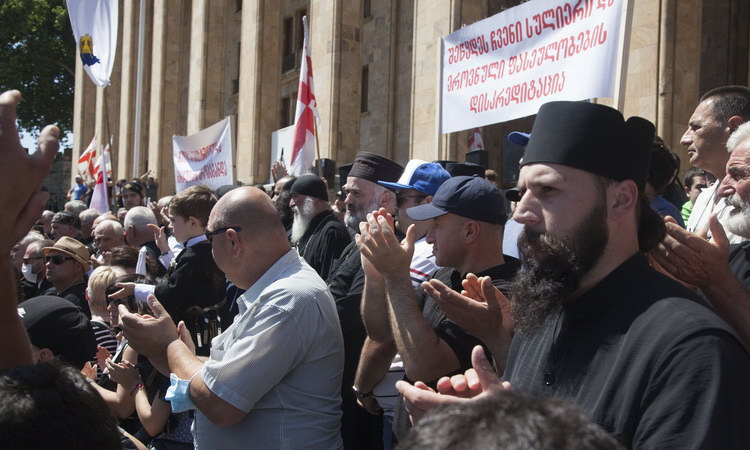 Protesters and the clergy of the Orthodox Church of Georgia at the counter-demonstration held in anticipation of the Tbilisi Pride march on Monday. Photo: Nino Alavidze/agenda.ge.

The activists said the violent events of Monday in the run-up to the march had followed the "inaction and use of hate groups as a weapon of political authority" and called it an "announced hunt on the media, activists and individuals who believe in equality."

As a co-founder of @TbilisiPride I am honestly scared to return to Georgia from the UK where I temporarily reside. Tbilisi Pride office was completely destroyed by far-rights. They are searching for Tbilisi Pride organisers and activists in order to prosecute them. It is a hell!

While confirming the cancellation of the Monday demonstration, the statement by the activist group said the "struggle for dignity will continue and is an irreversible process that will not be interrupted".

I don't have words.. This is not a democratic country. this is not Europe! @GovernmentGeo failed us. they failed Georgian democracy! #TbilisiPride21 #TbilisiPride #Georgia

Along with international organisations and the diplomatic corps, organisers of Tbilisi Pride had held meetings with the interior ministry over the recent weeks about ensuring safety for the march. The launch of the Pride week also saw diplomatic representatives join the activists in a film screening around LGBTQ rights last week, with violent groups attacking the site of the event.

Given the events today we have no expectation that the [interior ministry] will adequately execute its responsibility as we see them not reacting to facts of violence taking place in front of them, while a massive wave of violence we are witnessing is inspired and supported by the government and the Patriarchate

Earlier this month, Levan Vasadze, a right-wing businessman who recently founded a conservative political movement, gave the government until June 25 to cancel the upcoming Tbilisi Pride events, saying "otherwise people will react to the government’s decision". He added citizens would gather on Rustaveli Avenue in central Tbilisi on July 5 to prevent "anti-Christian and anti-Georgian" activities.

Organisers of events and demonstrations for queer rights in Georgia have had to postpone their planned activities a number of times over the past years, following the most high-profile incident on May 17, 2013 when participants of a demonstration on International Day Against Homophobia, Transphobia and Biphobia were evacuated by police from a large group of violent counter-demonstrators.