Georgian Prime Minister Irakli Garibashvili says that the conduct of the Tbilisi Pride march at 6 p.m. today ‘is not reasonable’ because it may lead to civic confrontation.’

He also stated earlier today that the country’s former President Mikheil Saakashvili and the ‘radical opposition’ are likely standing behind the march and ongoing rallies in central Tbilisi.

They (Saakashvili and the radical opposition) aim to spark tension and destabilisation in the country,” Garibashvili said.

He stated that the country’s Interior Ministry has already offered Tbilisi Pride organisers hold the march at a different location and not on central Rustaveli Avenue. 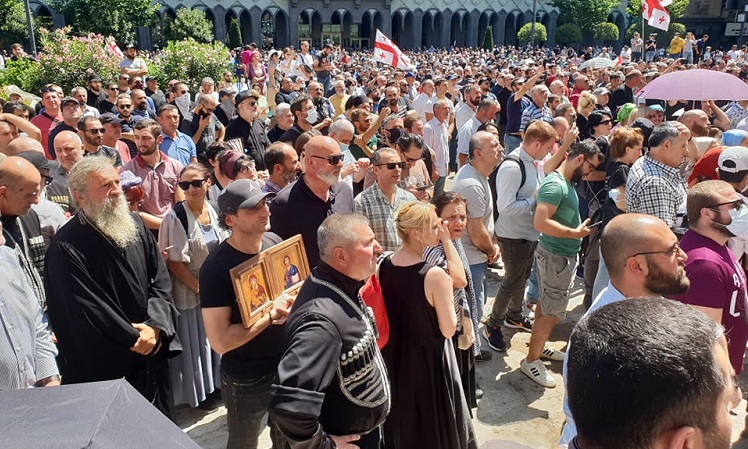 Individuals protesting the Tbilisi Pride march scheduled for 6 p.m. later today are now gathering in central Tbilisi for a counter rally, following the calls of the Patriarchate and right-wing groups. Photo: Nino Alavidze/Agenda.ge.

Garibashvili said that the rights of all individuals are protected in Georgia that is why the anti-discrimination law has been adopted and the definition of marriage has been specified in the country’s constitution.

I want to say that holding the march is the constitutional right of the people and we understand this. The state has done its utmost to ensure the safety during all their events in previous days. However, the march scheduled today carries risks of civic confrontation because the march is unacceptable by the vast majority of the country’s population. That is why I believe that the conduct of the march on Rustaveli Avenue is not reasonable,” Garibashvili said.

Dozens of protestors against the Tbilisi Pride march have already gathered on Rustaveli Avenue, demolishing opposition tents in front of the parliament set up to protest election-related issues in previous days. 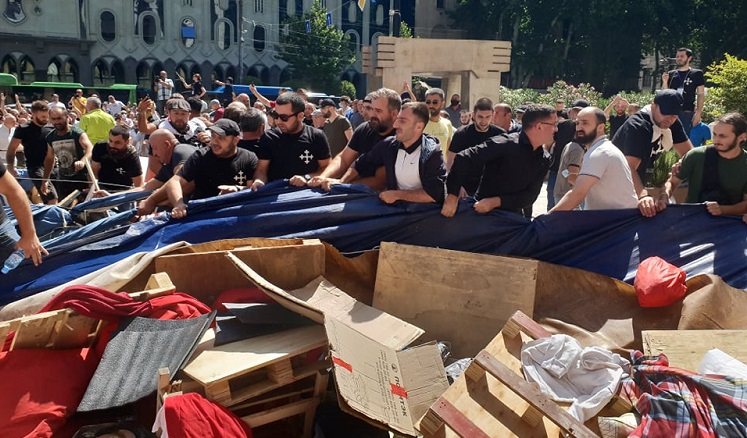 The protestors have accused the opposition of supporting Tbilisi Pride. Photo: Nino Alavidze/Agenda.ge.

Demonstrators have also thrown eggs and bottles at the office of civic movement Sirtskhvilia (shame) which supports the LGBT community.

Leader of Republican Party Leader Khatuna Samnidze has criticized Garibashvili for his statement and said that such statements encourage violence.