Twenty-one embassies and international organisations in Georgia have published a joint statement condemning violence in the Georgian capital city of Tbilisi, as well as the 'failure of the government leaders and religious officials' to condemn this violence.

We condemn today’s violent attacks on the civic activists, community members and journalists, as well as the failure of the government leaders and religious officials to condemn this violence.  Participation in peaceful gatherings is a human right guaranteed by Georgia’s Constitution.  Violence is simply unacceptable and cannot be excused", reads the statement. 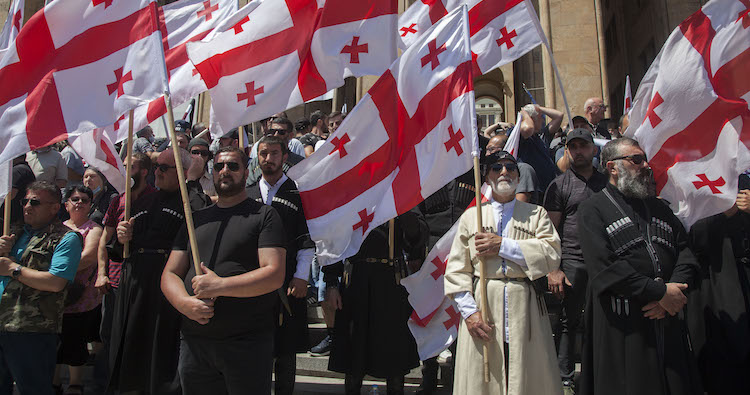 The statement also reads that those who 'incite or threaten violence or commit violent acts ... should be prosecuted to the full extent of the law'.

We call on all Georgia’s leaders and law enforcement to act swiftly to protect those exercising their Constitutional rights to freedom of expression and assembly, to protect journalists exercising freedom of the press, and to publicly condemn violence", reads the statement.

Watching events across Tbilisi. Violence, threats towards the LGBTI+ & attacks on journalists damage ????????reputation as tolerant, hospitable country. We call on authorities to prevent further violence & protect individual rights & liberties of all ???????? citizens as per ???????? constitution

We condemn all forms of violence as well as the failure of the authorities to prevent this violence, despite repeated warnings by Georgian and international civil society organisations over many days. (3/4). https://t.co/KHvCmf0Zea

Member of the European Parliament Cyrus Engerer posted on Twitter that the faces of men who broke into Tbilisi Pride office are visible and 'we expect' Georgian police to arrest them.

We expect #Georgia police to arrest and prosecute the men who broke into and vandalised @TbilisiPride offices. All their faces are visible.

Dutch politician, a member of the House of Representatives Ruben Brekelmans has posted an 'alarming images from Georgia' showing the right wing groups activists storming the office of Tbilisi Pride. He said that the European leaders 'need to put pressure on Georgia to immediately safeguard freedom and equal rights'.

Public Defender of Georgia calls for the Ministry of Internal Affairs to address the ongoing violence in public space
➡️ https://t.co/dpb1LLbbeC https://t.co/4XkCFRC9Jf

A member of UK House of Commons Martin Docherty-Hughes has shared an official trailer of the documentary film 'March for Dignity' and asked Georgian Prime Minister Irakli Garibashvili to watch it.