Injuries to citizens and law enforcement have been reported from ongoing protests on Rustaveli Avenue as items including stones and pieces of iron rods have been observed thrown from violent right-wing counter-demonstrators.

Participants of the peaceful protest against July 5 violent scenes have reportedly asked police to use riot units - located nearby according to law enforcement officers - against the violent groups whose attacks have left police professionals and citizens injured.

Law enforcement has been continuously making arrests on the avenue from the violent group attempting to cross their barricade:

InterPressNews agency said first aid had been provided to "several law enforcement" injured as right-wing protesters threw objects at them and repeatedly attempted to cross the barriers erected by police to separate the two demos.

on.ge news website also said a woman had been injured in the leg after being struck by a stone thrown from the violent right-wing counter-demonstration across to the "silent" protest involving independent citizens, political parties and queer activists outside the Parliament of Georgia. 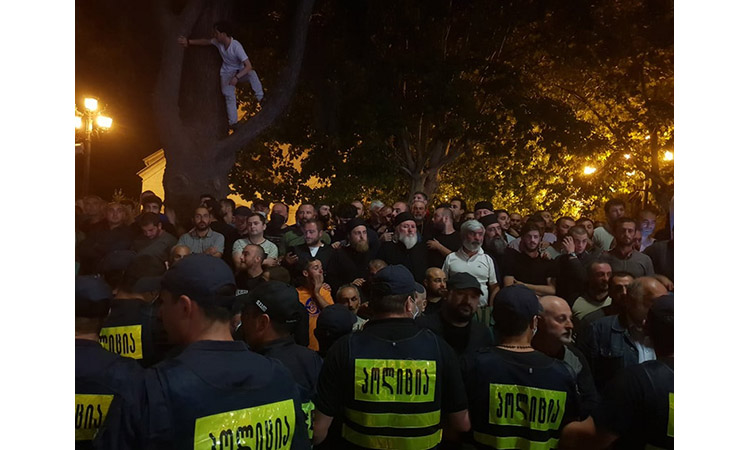 Reporters leading the Formula channel coverage of the events showed pieces of iron rods and stones used by the groups attempting to attack the "silent" demonstration, with pepper spray also reportedly used by them against law enforcement.

Participants of the peaceful solidarity protest asked Vazha Siradze, head of the Patrol Police Department, to use riot police against the violent demonstrators across the street, with Siradze reportedly informing them a use of riot units could be allowed "after a certain stage".

A Rustavi 2 channel footage showing police vehicles equipped with water cannons on Rustaveli Avenue, as protesters involved in the "silent" demonstration asked police to use riot units against the violent groups across the street:

Tuesday's protests follow developments on July 5, when right-wing groups gathered outside the parliament building to prevent the Tbilisi Pride march, a closing event of the week-long programme for highlighting queer rights, from taking place.

After the violent attackers left the reporters injured and stormed the Pride organisers' offices, the LGBTQ activists announced the march would not be held on Monday.