Georgian opposition parties which won seats in the October 31, 2020 parliamentary elections and who demand repeat elections have postponed a rally on February 25 to ‘give time to the ruling Georgian Dream party’ to resume talks.

The parties say that ‘there is no alternative to negotiations’ to solve the ‘current political crisis,’ adding that the opposition and the ruling party ‘must come to an agreement’ on repeat elections.

The opposition says that the political crisis in Georgia began in June 2019 when Russian MPs were allowed into the Georgian parliament and the rally on February 25 carried a ‘symbolic connotation.’

February 25 this year marks the 100th anniversary from the Soviet occupation of Georgia. The leader of the United National Movement opposition party Nika Melia is being persecuted for his participation in June 2019 protests,” UNM member Khatia Dekanoidze stated at yesterday’s briefing.

Georgian PM Giorgi Gakharia resigned last week, ‘because he failed to make an agreement with the ruling Georgian Georgian Dream party over the arrest of Melia.’

Melia is charged with incitement to violence during the June 2019 protests and was released on 70,000 GEL bail (40,000GEL was added to the bail in November 2019 for violation of bail conditions). 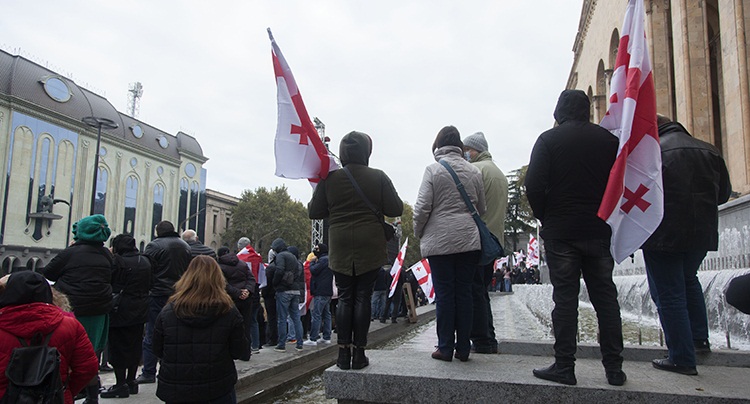 Melia refused to pay the additional 40,000 GEL and the country’s Chief Prosecutor’s Office demanded his arrest which was allowed by the court earlier last week.

Only six of 60 opposition MPs have entered the 150-member parliament so far.