Opposition United National Movement party member Nika Melia, who is charged with incitement to violence during the recent Tbilisi protests, will have to wear an electronic bracelet to be monitored, as the Court of Appeals did not change the decision of Tbilisi City Court earlier today and accepted Melia’s release on bail.

Melia was released on 30,000 GEL [$10,000] bail on June 27 and was prohibited from leaving home without previously informing law enforcers, making public statements in public areas and communicating with witnesses.

Wearing the electronic bracelet, which will allow the court monitor how the MP adheres to its decision, was a condition added by the judge of the Court of Appeals today, as demanded by the prosecution.

His release on bail by Tbilisi City Court was appealed by the Prosecutor’s Office of Georgia last week, which has demanded pre-trial detention for Melia. 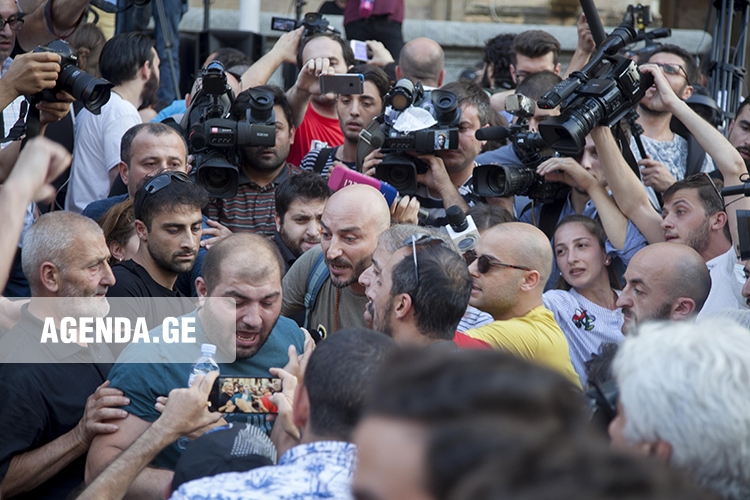 Melia is charged with organising violence by a group, heading the group and participation in the violence during the June 20-21 rallies in Tbilisi,  Photo: Nino Alavidze/Agenda.ge.

Melia says that he will inform law enforcers when he leaves home, but said he will come to parliament and continue his activities as he did before.

I will appeal the decision on restrictions to the Constitutional Court as they prevent me from carrying out my MP duties appropriately”, Melia said.

Melia and the opposition say that the charge has political grounds.

Georgian Prime Minister Mamuka Bakhtadze placed the responsibility on the opposition regarding the June 20 unrest, which left 305 detained and 240 injured.

He stated that the “destructive and irresponsible” calls and appeals by the opposition transformed “a peaceful and justified” rally in Tbilisi into unrest.

The rally in Tbilisi on June 20 was sparked by the presence of Russian MPs in Georgia and an address of one of them from the seat of the Georgian parliamentary speaker.