Zurabishvili had stated earlier on April 19 that she would pardon Rurua if Georgian political parties signed the renewed EU-proposed agreement and if opposition MPs entered parliament.

She noted in a statement today that while the political parties have reached the agreement and publicly signed the final document, the opposition will enter the state legislature on April 27.

Therefore, the Presidential Pardoning decree will be issued the same day”, President Zurabishvili wrote in Facebook.

The Georgian President also said she decided to pardon Rurua 'in order for the country and parliament to return to a normal political situation'.

Salome Zurabishvili has tweeted on April 19 that:

Pardon is not a political decision. It must not be subject to interference, pressure or negotiations.

But I take upon myself the duty to end the deadlock. I will pardon, but only once the parties sign the final agreement and the EU/US announce that an agreement has been reached.

Giorgi Rurua, who was found guilty for the illegal possession and carrying of firearms, was sentenced to four years in prison in July, 2020.

Rurua's release was among the key demands of the opposition parties who have been refusing to take up their parliamentary mandates since the last year's parliamentary elections. 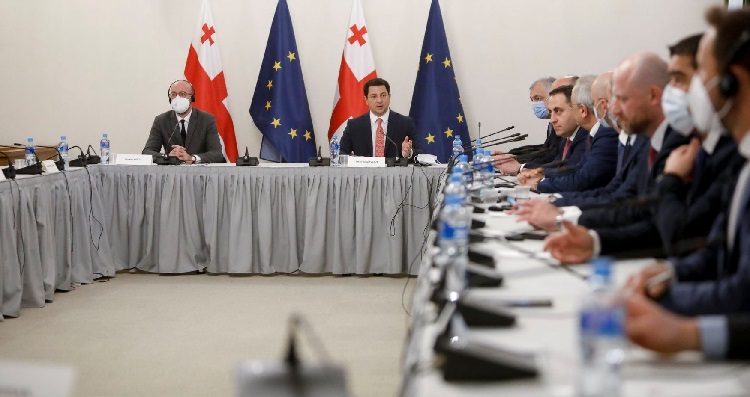 European Council President Charles Michel, who arrived in Georgia after the Georgian opposition and authorities signed the EU-proposed agreement, has stated that the ability to come to a compromise is a strength, not a weakness. Photo: Parliament's press office

Political opponents in Georgia managed to reach an agreement after a long deadlock on April 19 with the mediation of European Council President Charles Michel.

Nevertheless, not all the opposition parties have signed the EU-proposed document yet, claiming they will do so after Rurua and another 'political prisoner' - United National Movement chair Nika Melia will be released.