EU Council President on political agreement: This is the moment to take up challenging reforms in parliament

European Council President Charles Michel, who arrived in Georgia after the Georgian opposition and authorities signed the EU-proposed agreement, has stated that the ability to come to a compromise is a strength, not a weakness.

Compromise is a European strength. It is not a weakness. It allows a plurality of voices and collective intelligence to emerge”, President Michel said after his meeting with Georgian Prime Minister Irakli Garibashvili.

Stating that ‘it is not time for anyone to sleep on laurel leaves’, he also added that ‘this is the moment to take up the challenging reforms in the Parliament and to work towards them’.

These reforms are what Georgia needs. They will ensure your citizens' demands are better met, and what will also open up the path to deeper cooperation between Georgia and the EU”, he said.

Charles Michel told Garibashvili that the EU is Georgia's ‘strongest partner’ noted that Georgia and the EU ‘share common values’ and that the EU supports Georgia’s reforms ‘to consolidate democracy and the rule of law’.

EU Council President said in his remarks today:  "I count on you and you can count on us".

???? LIVE NOW - Follow my remarks to the press with Prime Minister of Georgia @GharibashviliGe https://t.co/fvAHsavYVN

Wishing PM Garibashvili and all the political leaders success, Charles Michel said this ‘will advance your country's democracy, stability and prosperity, in closest cooperation with your European friends’.

Welcoming @CharlesMichel in ????????! This visit is yet another confirmation of ????????'s high importance on ????????'s agenda. The agreement will help to consolidate stability & will let us focus on critical challenges. Once again, we have reaffirmed our commitment to European values.

The European Council President Charles Michel arrived in Georgia to meet with the leaders of the political parties who signed his proposal yesterday aimed to solve the political tension in the country which began following the 2020 parliamentary elections.

Michel's renewed proposal of April 18 covers electoral and justice reforms, offers pardon for all violations and convictions stemming from the 19-21 June 2019 protests and the conduct of repeat parliamentary elections in 2022 if the ruling party fails to receive at least 43 per cent of votes in this year’s municipal elections. 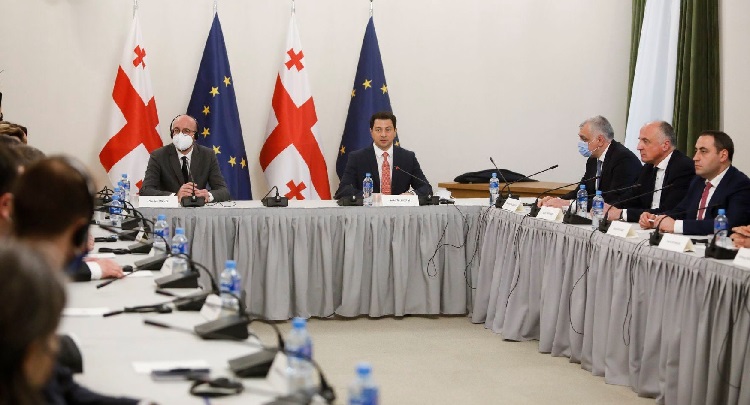 Charles Michel met with parliament members from the ruling party and the opposition who signed the political agreement yesterday. Photo: Parliaments' press office

Although several current and former members of United National Movement and European Georgia have also signed the agreement individually, other representatives of both parties as well as Labour Party refuse to sign the EU-proposed document yet.