The leader of the United National Movement (UNM) opposition party Grigol Vashadze has called on other opposition parties to sit at a table with the ruling Georgian Dream party to resolve election-related complications.

Vashadze’s statement, which was released by the New Post agency, was ‘unexpected and confusing’ for opposition parties, including the UNM.

Other members of the UNM said that ‘the statement is Vashadze’s personal opinion which was not agreed upon with us.’

The opposition parties who took to the streets following the October 31 parliamentary elections say that the elections were fabricated.

They are demanding repeat elections, dismissal of the head of Georgia’s Central Election Commission and recomposition of the commission.

In the statement Vashadze says that opposition’s accusations are right. However, he says that the current political situation is taking the country to chaos and destabilisation.

He stated that if the Georgian political spectrum fails to realise the challenges and rejects the advice of NGOs and international partners on holding negotiations, ‘we will lose the chance of further democratic development of Georgia.’

Vashadze stated that the opposition should bring the recount process of disputed election districts to the end with the involvement of strategic partners, as well as the discussion of election complaints.

The steps will allow us to end the political crisis by the rightful winning of the opposition and gaining majority in parliament,” Vashadze said, adding that the CEC chair Tamar Zhvania ‘must resign’ and the new parliament must create a special commission to look into the election violations and ensure the creation of ‘fair electoral environment that will exclude fabrications.’

The European Georgia opposition party leaders called the statement 'unexpected and confusing' and appealed to Vashadze to further explain his words. 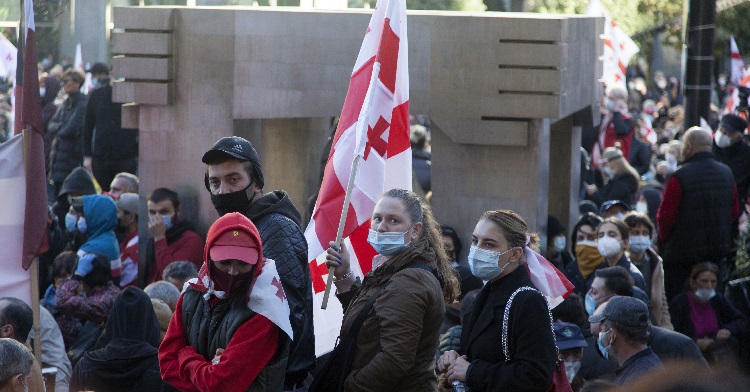 Eight opposition parties refused to take up their mandates in parliament and took to the street. Photo: Nino Alavidze/Agenda.ge.

UNM member Khatia Dekanoidze stated that ‘it is regrettable that the party leader made the statement without the agreement of the party members.’

Fellow member of the party Nanuka Zhorzholiani said that ‘if Vashadze really wrote the statement, he must quit the post of the party leader.’

Later Vashadze published ‘explanations,’ where he said that rallies should continue but ‘a political component should be added to the protest.’

He said that negotiations, with the mediation of strategic partners, should take place to ensure fairness for the elections.

Vashadze said that if the negotiations will not bring results, the opposition parties must not participate in the second round of elections and must not take up their mandates in parliament.

He stated that ‘everyone must take steps’ a normal political process not to be replaced by rallies ‘due to the fabrication of elections in the future.’