Orthodox Christians in Georgia are celebrating one of the most significant dates in the religious calendar, Easter.

The liturgy started around 11 p.m. last night at Trinity Cathedral in Georgian capital of Tbilisi and some other churches throughout the country but few worshippers attended the service amid the coronavirus pandemic.

Earlier this week, the Georgian government and the patriarchate agreed on that the traditional Easter service on Saturday night would be held with police supervision despite the curfew.

State and health officials had called on worshippers to follow the state of emergency regulations, stay home, maintain social distancing and watch the Easter liturgy on TV.

However, those, who wanted to attend the Easter service had to go to churches until 9 p.m. and stay there until 6 a.m. not to violate the curfew regulations. 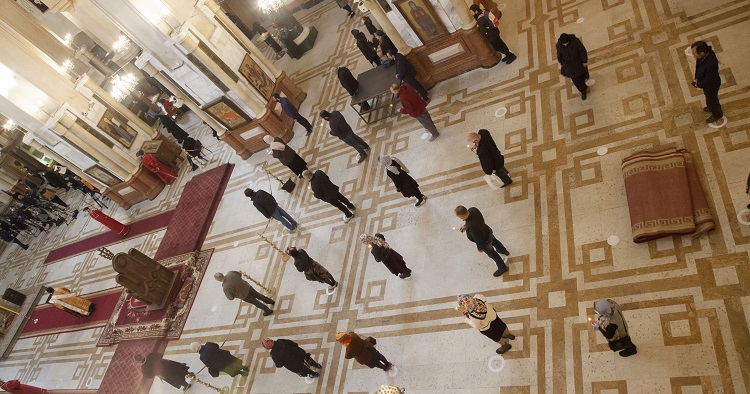 Worshippers at large churches had to maintain a 2-meter social distance, while in small churches worshippers had to stay outside during the service. Photo: Nino Alavidze/Agenda.ge archieve

Meanwhile, as all private vehicle traffic has been banned nationwide until April 21, they could only walk to their churches to join in on celebrations.

Some of the churches refrained from gathering last night and instead held Easter service after 6 p.m. this morning.

Those who stayed home gathered at their balconies at 12 a.m. and lit candles to celebrate Easter, shouting at their neighbours: "Christ is Risen! Indeed He is Risen."

Every year on the day after Orthodox Easter, Georgians visit the graves of their loved ones, bringing with them Easter eggs painted red, traditional pastries and wine to commemorate those who have passed.

But this year, given the coronavirus outbreak in the country, the tradition poses a risk to public health as restrictions have been imposed on visiting cemeteries in cities throughout the country during ten days from April 17.