Gov’t says Easter service will be held with police supervision, but parish asked to stay home

The Georgian government and the patriarchate have reached a long-awaited deal that the traditional Easter service on Saturday night will be held with police supervision despite the curfew.

However, the Georgian government calls on worshippers to stay home and follow the state of emergency regulations amid the coronavirus pandemic.

Prime Minister Giorgi Gakharia’s spokesperson Irakli Chikovani announced at a late night news briefing today that churches will remain open, but maintain social distancing "to protect the health and lives" of the worshippers.

Chikovani said the churches will observe all the safety norms established by the Healthcare Ministry and the National Disease Control Centre.

He said, in large churches, a social distance of at least 2 meters will be maintained, while in small churches, only clergymen will hold the service without worshippers. 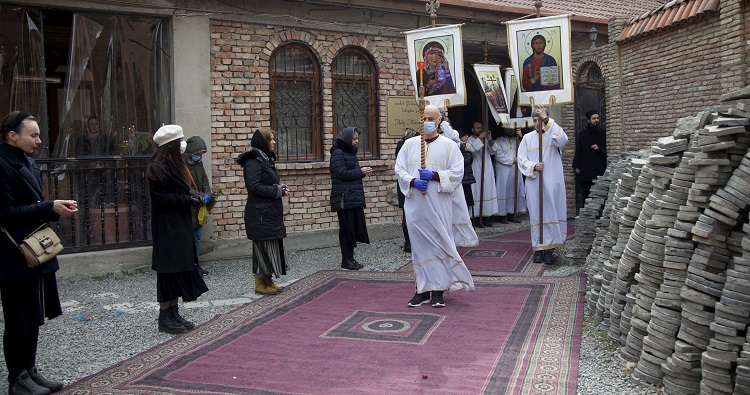 Chikovani announced that during ten days from April 17, restrictions will be imposed on visiting cemeteries in cities throughout the country.

Meanwhile, spokesperson of the patriarchate Archpriest Andria Jaghmaidze told journalists after Chikovani’s briefing that the worshippers will go to churches until 9 p.m. and will stay there until 6 a.m. not to violate the curfew regulations.

This, Jaghmaidze said, would give them an opportunity to “fully engage” in the Easter service.

At the same time he recommended "risk groups", including people with certain diseases or symptoms of virus as well as children, or those who have such family members, to stay home and reveal “civic responsibility”.

Jaghmaidze also added that large churches will follow all of the recommendations and maintain a 2-meter social distance, while in small churches worshippers will stay outside.