Police have dispersed a rally near the parliament building at 5 a.m. earlier today.

28 individuals have been detained while three others have received injuries, the Georgian Interior Ministry reports.

Law enforcers used water cannons to open the entrances of the legislative body which were blocked by the opposition and demonstrators protesting the rejection of an election reform bill on November 14.

The opposition had plans not to allow the conduct of the parliament plenary session scheduled today.

Demonstrators were warned and given time to leave the territory. However, they refused to do so. The demonstrators violated the law on manifestation through blocking the parliament’s work and the street. Parliament entrances and Rustaveli Avenue are now open,” the Georgian Interior Ministry has reported.

The Health Ministry says that four individuals were hospitalized after the rally dispersal and one of them has already been discharged. 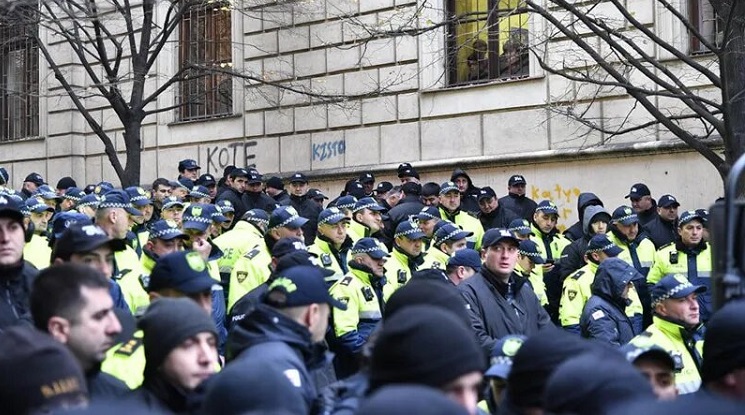 The ministry has dismissed media reports that one of the four individuals was in thermal shock after being soaked during the dispersal.

The health ministry says that the young man was diagnosed with alcohol intoxication.

As of now the police have taken the parliament territory and nearby streets not to allow demonstrators to enter the area again.

The opposition say that dispersing the rally “is a shame” and “Bidzina Ivanishvili [founder of the ruling party] is distancing himself from the people and the international community very rapidly.”

The opposition vows rallies will continue until the current state leadership accepts the conduct of 2020 parliamentary elections per the German model, by an interim government.

Rallies in Tbilisi were sparked after the bill on the transition to a fully proportional electoral system starting 2020 instead of 2024 was rejected on November 14 as 40 MPs of the ruling party refused to vote for the bill proposed by their own party.

The opposition, which welcomed the change in the summer, is accusing the ruling Georgian Dream party of “cheating the people.”

The ruling party accepted the change last summer, during June protests in the capital city.