Parliament Speaker Archil Talakvadze has urged opposition MPs, who are now protesting the rejection of an election reform bill on the streets, to return to the legislative body and voice their demands in parliament.

Parliament is the place for discussions [and not the street],” Talakvadze said, adding that the legislative body will continue work to make “vital decisions” for the country, including the adoption of the 2020 state budget.

The opposition says that rallies will continue until the government accepts the German electoral model for the 2020 parliamentary elections.

The model will ensure fair elections for 2020 and the change might be carried out in the election code in the coming three weeks with the support of 76 MPs (in the 150-member parliament) only.  If the government accepts the change, the rallies will end,” the leader of the Eupnean Georgia opposition party David Bakradze said.

The ruling party says that the German model contradicts the Georgian constitution. 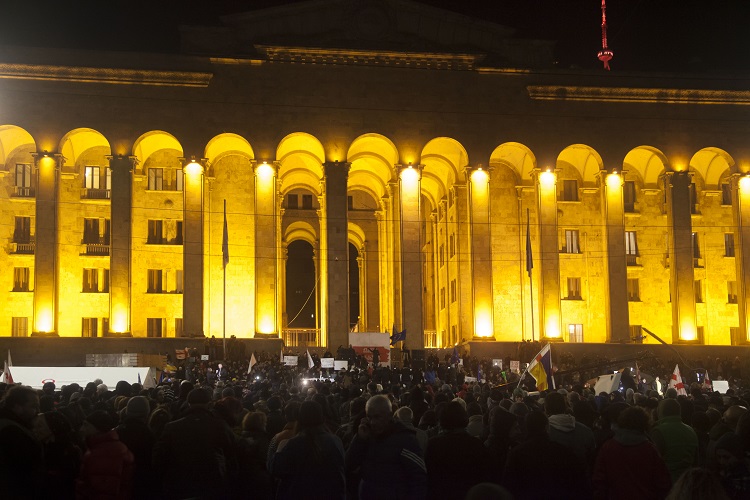 They said it was not a boycott, “we just did not want to attend the process of distribution of parliamentary posts among ruling party MPs.”

Protests were sparked in Tbilisi after the rejection of an election reform bill on November 14 which was proposed by the ruling Georgian Dream party, offering the transition to a fully proportional electoral system starting 2020 instead of 2024 [as the current state constitution reads].

The bill was scrapped as 40 ruling party MPs refused to vote for it.

The opposition, which says that the current mixed-electoral system of Georgia is unfair, is accusing the current state leadership of “cheating people,” and is demanding the German model of mixed elections which allows the distribution of seats in parliament based on votes received in proportional, party-list voting.

The ruling party says that “it is sad” their proposed bill was rejected, stating that the Georgian Dream “is the only political force in Georgia” which proposed and adopted constitutional changes in 2017 on the transition to a fully proportional voting from 2024.

The ruling party accepted the early transition [from 2020] to fully proportional elections in the summer, during June protests in Tbilisi.