Opposition reacts to Gakharia’s nomination for PM with protest [VIDEO]

The parliamentary opposition has suspended the first day of the autumn session in parliament with whistles and loud statements, protesting the nomination of Interior Minister Giorgi Gakharia as the new PM of the country.

They said that nominating Gakharia to the post, “who brutally dispersed the anti-Russian occupation rally on Rustaveli Avenue on June 20-21,” is an insult to the Georgian people and is “very cynical.”

A member of the European Georgia Elene Khoshtaria whistling in parliament in protest, while Parliament Speaker Archil Talakvadze requests resource officers  to ensure the peaceful conduct of the session. Video by Netgazet.ge.

A member of the European Georgia opposition Elene Khoshtaria started whistling as soon as the national anthem finished in parliament earlier today, while the leader of the party Gigi Ugulava said that the founder of the Georgian Dream party Bidzina Ivanishvili “actually legalised sadism,” through nominating Gakharia.

Demonstrators, who have been protesting the presence of Russian MPs in the Georgian parliament on June 20 and demanding the resignation of Gakharia for the following  rally dispersal, stated that they will gather in front of the parliament building at 7 pm today to protest the decision.

Today, instead of firing him, Ivanishvili promoted Gakharia and unleashed a war against the Georgian people,” leaders of the demonstrations have posted today.

A member of the ruling party Mamuka Mdinaradze “expressed condolences” to the opposition, as “you failed to storm parliament on June 20 and overthrow the government.”

He repeated that the opposition transformed ‘a peaceful and a justified protest’ of demonstrators into violence and Gakharia managed to avoid “unrest and security threats to the country.”

Georgians were outraged by the address of Russian MP Sergey Gavrilov from the seat of the Georgian parliamentary speaker during the Interparliamentary Assembly on Orthodoxy on June 20. 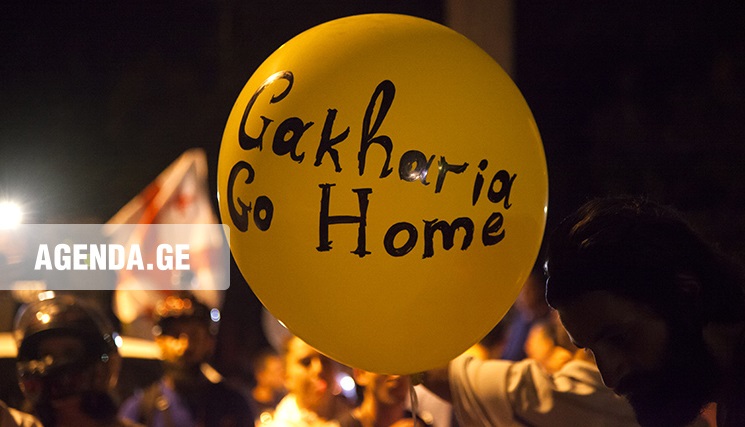 Leaders of the Georgian Dream pointed at the mistake of organisers of the event and said that the protest was justified.

The rally following the developments in parliament on June 20 was dispersed by police after demonstrators decided to storm the parliament building, leaving 305 detained and 240 injured, with two young people losing one of their eyes.

Gakharia said that the police were forced to take the measures.

The ruling party met two of the three demands of the demonstrators regarding the resignation of former Parliament Speaker Irakli Kobakhidze and moving to the fully proportional elections in 2020, while refusing to dismiss Gakharia.