Peaceful demonstrations in front of the parliament of Georgia have resumed for the 76th consecutive day, this time protesting Giorgi Gakharia’s nomination as next Prime Minister.

Demonstrators, who have been protesting the presence of Russian MPs in the Georgian parliament on June 20 and demanding the resignation of Gakharia from Interior Minister’s position following the rally dispersal, gathered at 7 p.m. to protest his “promotion”.

Young activists and opposition leaders addressing the crowd this evening, claimed they did not want “aggression” but rather they wish to change the current government through peaceful elections next year.

Our fight continues… It will end with our victory”, Giga Makarashvili, a civic activist and one of the organisers said.

The demonstration lasted for over three hours. Stressing that they would fight till the end, the demonstrators promised to gather again every day “in the country’s service”. 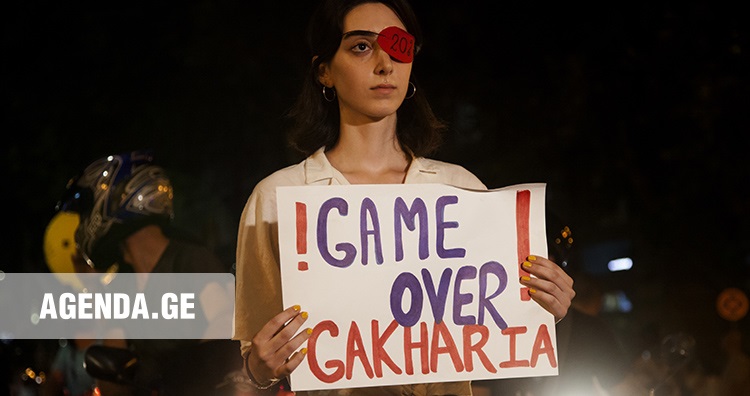 Gakharia's resignation has been one of the three main demands of peaceful demonstrators since June 20 clash in front of the parliament building in Tbilisi. Photo: Nino Alavidze/Agenda.ge

Opposition suspended the first day of the autumn session of the parliament with whistles and loud statements, protesting Gakharia nomination.

They said that nominating Gakharia as the country's next PM, “who brutally dispersed the anti-Russian occupation rally on Rustaveli Avenue on June 20-21,” is an insult to the Georgian people and is “very cynical.”