Fitness club Reformer Fitness in Batumi has been closed by police and fined 10,000 GEL after it was rented out by libertarian Girchi party leader Zurab Japaridze, who offered the public to use the facility – what Japaridze called his ‘home’ – despite the coronavirus regulations forbidding the functioning of gyms.

A first inspection of Reformer Fitness was carried out at the club on November 28 when it was fined 10,000 GEL for refusing to close its premises, but as the fitness club continued functioning the next day, police closed the club the next day on November 29.

However, the owner of the fitness club Giorgi Putkaradze said that he does not intend to pay the fine as the fitness club stopped functioning after the first inspection and the building was rented to Japaridze.

Japaridze said he rented Reformer Fitness as a private house after the labour inspectorate fined the facility for prohibited economic activities. He posted on Facebook yesterday that everyone who wanted to work out could visit his home.

As long as these regulations exist, I will have a house in Batumi. I am going to live here where I have exercise equipment that is rented along with the space. Anyone who has been training in Batumi, Kvariati, Gonio, Sarpi or the nearby area and the halls have been closed, you can come and train here, visit my house and train", said Japaridze. 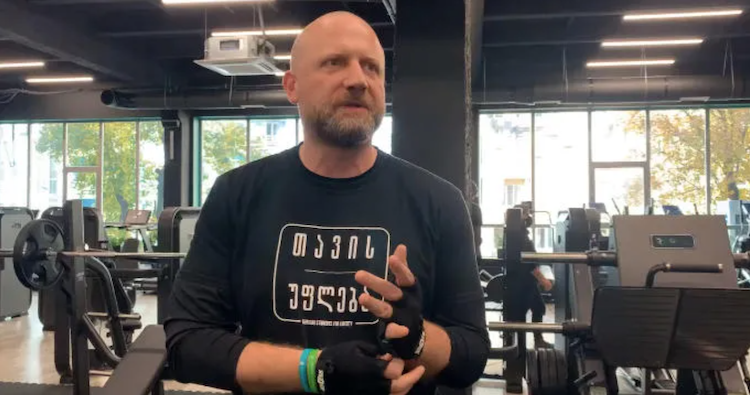 Japaridze posted on Facebook yesterday that everyone who wanted to work out could visit his home. Photo: IPN.

Following Japaridze's announcement police once again carried out an investigation in Reformer Fitness. Police even arrested one person but later released them.

Japaridze said today that yesterday the police used physical force to make him leave the building of the fitness center. He said that the police were not allowed to enter his apartment.

The Ministry of Internal Affair says that committing the same action by a person who has already been administratively punished for violating the coronavirus rules will face criminal charges.

The above mentioned crime committed by the legal entity include a fine, deprivation of the right to operate, as well as the possibility of joint use of liquidation and fine, while in the case of a physical person - house arrest from six months to two years and / or up to three years of imprisonment", says the ministry.