Tbilisi Pride, which was scheduled to take place earlier today, has been cancelled “due to increased threats”, as clerics, nationalist groups and their supporters have gathered at different locations in Tbilisi to prevent the march from taking place.

Clerics have also called upon the Interior Ministry to remove tents and banners from the Tbilisi parliament building, which have been brought by protestors from earlier “with unclear messages with the help of several embassies, including the US embassy.”

The gay march must not be held in Georgia. The rallies which have been ongoing since June 20  should also come to an end. We want peace and stability. If they want to hold concerts and rallies [the people protesting the Russian occupation] they can choose another location. Rustaveli Avenue is ours as well, one of the loveliest places for Tbilisi residents, and we want to freely walk here with our children,” one of the clerics, Father David Isakadze said.

Nationalist groups are marching on Tbilisi streets. They agreed to wear a white cloth on their arms to know one another. Video by Agenda.ge.

Tbilisi Pride organisers wrote in a closed group on Facebook last night that the march would be held in front of the Interior Ministry headquarters, on the outskirts of Tbilisi, on Monday morning.

However, information about the event was leaked and nationalist groups set up camp earlier than LGBT supporters.

Various nationalist groups, headed by businessman Levan Vasadze and the Georgian March gathered at Vera Park in Tbilisi and other locations and then moved to the parliament building of Tbilisi, which has been the location of anti-occupation demonstrations starting June 20.

We will stay here till the end of the day, we will not allow LGBT supporters to hold any event,” Vasadze said.

People protesting holding of LGBT events in Georgia are standing in front of the parliament building. Video by Agenda.ge.

Members of the nationalist groups say that many of the LGBT activists are participating in the anti-occupation rallies, which were sparked in Tbilisi on June 20, after a Russian MP took the high tribune of the Georgian parliament.

Tbilisi Pride organisers, who cancelled the event shortly after the information leaked yesterday, have not spoken about their future intentions so far.

One of the organisers of the anti-occupation rallies, Zuka Berdzenishvili, said that “demonstrations will continue anyway.”

If somebody has a different view on the rallies, let them have it. We are holding democratic demonstrations and events and the space [in front of the parliament] belongs to everyone. If nobody has violent intentions, we will continue to stand here,” he said.

An incident has already taken place between nationalist group members and the anti-occupation demonstrators, when one of the demonstrators called Vasadze “a man of Russia.” 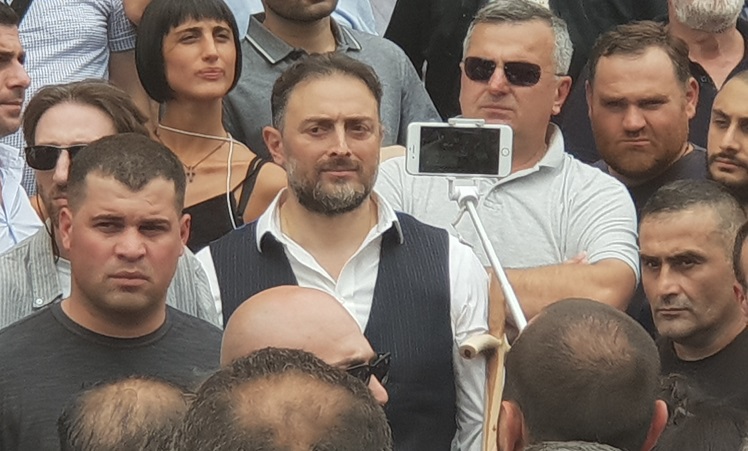 Levan Vasadze (in the middle) says that the gay march will never be held in Georgia. Photo: Nino Alavidze/Agemnda.ge.

However, the incident ended shortly.

Tbilisi Pride, a week-long raise of awareness events to sexual minorities, was scheduled to take place between 18 and 23 June. However, the event was canceled amid the protest of the church and nationalist groups.

The pride march was re-announced for June 20, but was postponed due to the situation in the country created by the presence of Russian MPs.

July 8 was set to be the third date of the march.