Peaceful demonstrators who have been holding protests in Tbilisi for 19 days already say they will not stop until Interior Minister Giorgi Gakharia resigns.

Today however they were unable to take up their traditional spot in front of the parliament building on Rustaveli Avenue in central Tbilisi as a counter-protest had taken their place.

#Georgia #TbilisiProtests #HappeningNow: Portrait (on car) of Archil #Tatunashvili, tortured and killed in #occupied #Tskhinvali region (South #Ossetia) is one of the symbols of #protest on one part of #Rustaveli ave, devided 2day Check https://t.co/BNtP2Oqx92 for latest updates pic.twitter.com/B5Jd3DoPI8

Saying “we are Georgians, therefore we are Europeans”, the anti-occupation activists stand on one side of police cordon in the middle of Rustaveli Avenue, the organisers and activists of Tbilisi protests, hold flags of Georgia and the European Union and perform the national and EU anthems.

#Georgia #TbilisiProtests #HappeningNow Demonstators from the anti #occupation rally on Rustaveli ave in central.#Tbilisi are trying to send their message to the countr- rally members Follow https://t.co/BNtP2Oqx92 for latest updates pic.twitter.com/q6Qzv3p7vB

Meanwhile, Georgian businessman Levan Vasadze, who is known for his former anti-LGBT statements, has called on Parliament Speaker Archil Talakvadze to meet with them, and to abolish the anti-discrimination law and to introduce a law "banning perverted behaviour."

Former parliament MP Dimitri Lortkipanodze who stands along with Vasadze called on the Alliance of Patriots parliamentary opposition to join them.

The clerics from the counter-demonstration, who have been condemning LBGT propaganda, have been praying with the protesters throughout the day.

In an earlier statement, the police called on both sides to keep a safe distance from one another and avoid confrontations.

Empty buses and a line of law enforcement officers was moved in to block the space between the two groups, with the interior ministry laying responsibility for a possible clash on the demonstrators. 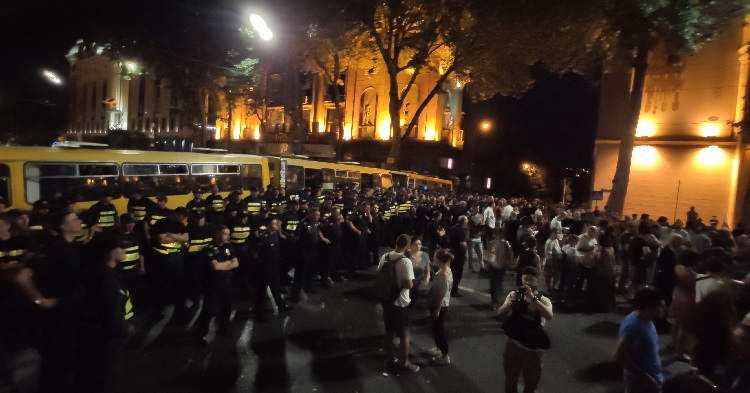 One person from anti-occupation protest was reportedly injured by the counter-demonstrators. Public Defender Nino Lomjaria who came to Rustaveli Avenue hoped this incident would have adequate response from law enforcers.

She said “it is unfortunate” that the youth have no opportunity to express their protest in front of the parliament of Georgia, where they have been gathering for so long. Lomjaria also hoped the situation would soon become calm and no physical confrontation will take place.