Russian president Vladimir Putin has ordered a ban on flights to Georgia as part of Russian state reaction to protest in Tbilisi following a Duma MP's appearance in the Tbilisi parliament.

Putin ordered cessation of flights after a date of July 8 while also tasking his government with returning Russian citizens on temporary stay in Georgia and prohibiting Russian tour agencies from organising travels to the country.

The Kremlin's press office said the Russian interior ministry would establish communication with its counterpart in Tbilisi - amid an absence of diplomatic relations between the two states following the 2008 war between them - for their "security and and return" to homeland. 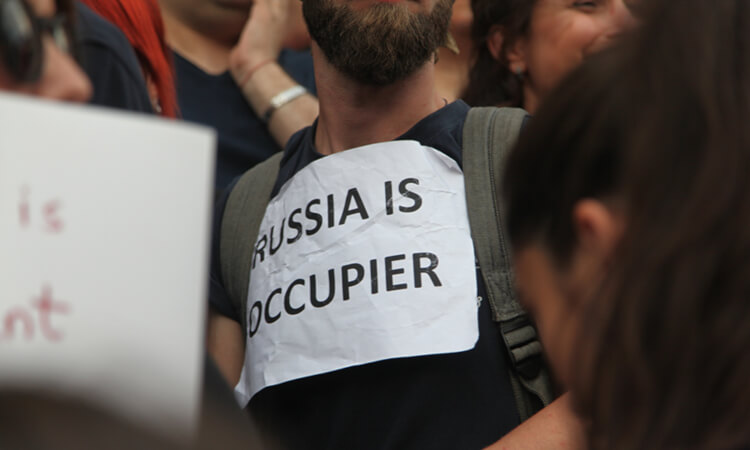 A protester wearing a banner related to the presence of Russian troops in Georgia's occupied regions of Abkhazia and (Tskhinvali) South Ossetia. Photo: Nino Alavidze/agenda.ge.

Official Russian reaction to developments in Tbilisi have included calls for boycotting tourism and trade goods with Georgia and demands of Russia's participation in investigations of events in the wake of Duma MP Sergey Gavrilov's appearance at the Georgian parliament on Thursday.

Gavrilov's address from the seat of the parliament speaker sparked prostest from opposition MPs and citizens, who blocked the Rustaveli Avenue in front of the lawmaking venue and demanded repercussion for the Georgian government.

After police used water cannons, teargas and rubber bullets on them throughout the night of June 20-21, protesters returned on Friday evening to resume their demonstration.