EU's transport investment action plan to include 18 projects worth €3.5 billion in Georgia [MAP]

The European Commission together with the World Bank have developed a new Indicative trans-European Transport Network (TEN-T) Investment Action Plan that identifies priority projects in Eastern Partnership countries, including in Georgia.

Armenia, Azerbaijan, Belarus, Georgia, Republic of Moldova and Ukraine are part of the Eastern Partnership.

Together, these almost 100 projects amount to an investment of almost €13 billion up to 2030 and foresee a total of 4,800 kilometres of road and rail, six ports, and 11 logistics centres.

As for Georgia 18 projects worth €3.5 billion will be implemented in the country.

A number of financial institutions will back the projects, while some will be implemented as Public Private Partnership (PPP) enterprises, which is a cooperative arrangement between two or more public and private entities.

The money will be spent on the construction of roads and rail lines, ports, airports, logistic centers and border checkpoints. 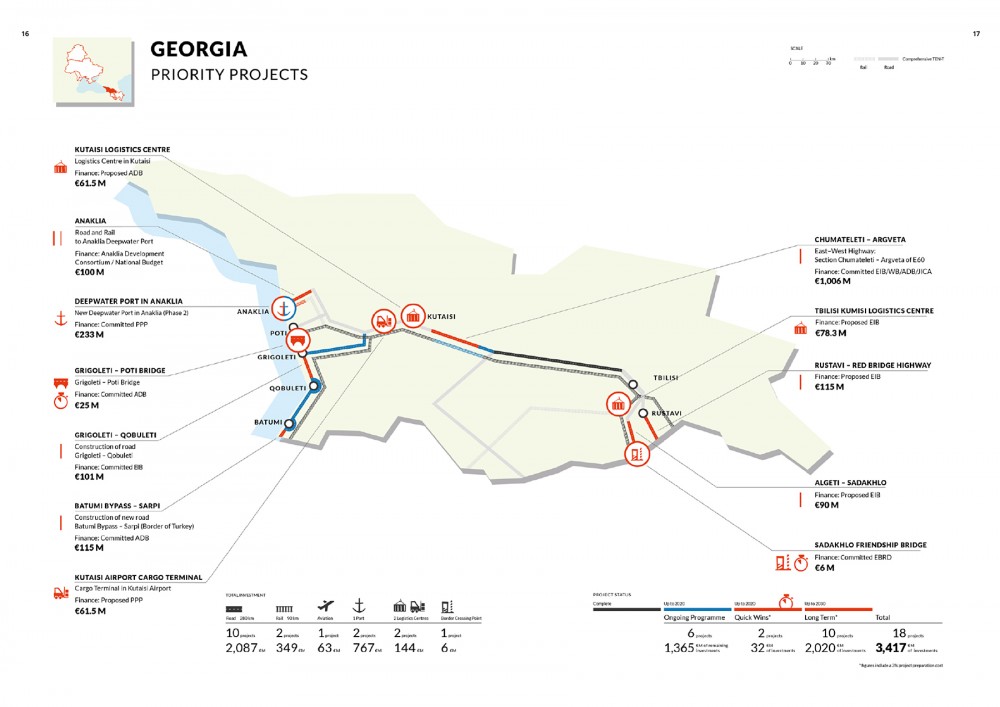 Click the link to the the full version of EU Investment Action Plan for EaP countries.

Georgian Minister of Foreign Affairs David Zalkaliani said that Georgia's integration into the European structures is the main priority of the country’s foreign policy and the EU’s financial aid corresponds to the policy.

There are several dozen important projects that implies development of transport and infrastructure and we just welcome this step of the European Union”, said Zalkaliani.

What are the projects that will be implemented in 2020-2030 in Georgia?

Here is a list of the projects that will be implemented in Georgia and which will bring €3.5 billion investments to the country: