Georgia will receive almost €50 million from the EU within the Support for Skill Development financial agreement and about €48 million within the Economic Development and Business Support in Georgia agreement, Georgian Prime Minister Mamuka Bakhtadze has announced after a meeting with EU Commissioner Cecilia Malmstrom.

Both agreements were signed last year in Brussels.

While talking about the Skill Development financial agreement, Bakhtadze said that the employment of the Georgian population is the main concern of the government, and vocational education is a highly effective way to overcome this challenge.

Accordingly, this project is directly related to the reform that we have announced in the education… we will direct all our resources to make education the dominant sector of our economy”, said Bakhtadze. 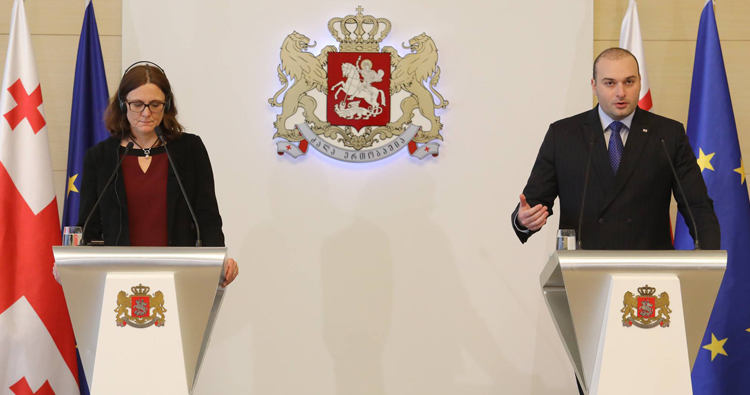 Malmstrom and Bakhtadze made announcements after the meeting at the Administration of the Government of Georgia. Photo: PR's press office.

As for the Economic Development and Business Support in Georgia agreement, its goal is to improve social and economic development in the regions of Georgia.

The emphasis will be made in three directions – to solve faster commercial disputes, modernise financial infrastructure and support the process of establishment of market-oriented and innovative business models”, said Bakhtadze.

As for Malmstrom, she is visiting Georgia, meeting the country’s authorities and representatives from civil society to discuss the functioning of the trade agreement between Georgia and the EU and the sustainability chapter when it comes to labour and environmental issues.

Meeting representatives from civil society in Tbilisi to discuss the functioning of the trade agreement and the sustainability chapter when it comes to labour and environmental issues. pic.twitter.com/Jz1C90dxjs

Bakhtadze said that the EU is the main trade partner of Georgia and it is especially good that the export of Georgian produce to the EU market is growing every year.

Relations between Georgia and the EU have never been at such a high level”, Bakhtadze said.

Malmstrom also mentioned the successful relations that are between Georgia and the EU, but added that “we can do more and this is why I am in Georgia”.

At the meeting with the PM I’ve discussed those prospects that we can use to help Georgian entrepreneurs know what benefit the EU market can bring to them and how to have better access to the EU market”, said Malmstrom.

Bakhtadze said that "up to 800 Georgian companies are represented on the European market and they sell their products with the inscription - Made in Georgia”. He added that Georgia already feels “very specific and good results” of free trade deal with the EU.

Malmstrom stated that the EU has already invested heavily in Georgia and “we want to increase its magnitude in the following years to make our activities more diverse and diversified and create more job places as a result”.

We give access to credit for the Georgian farmers. €80 million has already been allocated and thousands of farmers will be able to benefit from it. New job places are being created”, she said.

Pleasure to meet with President @Zourabichvili_S. We discussed the close cultural and economic ties between the EU and Georgia, as well as how Georgian companies can make the best use of our trade agreement to export to Europe. #EUTrade pic.twitter.com/qX9dMIdIsL

As part of her visit, Malmstrom also met with EU Ambassador Carl Hartzell .