During the presentation at Tbilisi Botanic Garden earlier today, Bakhtadze stated that the ombudsman will report to him.

This institute will be the most important mechanism to overcome environmental challenges in Georgia,” Bakhtadze said.

Minister of Environment and Agriculture Levan Davitashvili said that the ombudsman will have his secretariat to discuss environmental issues. 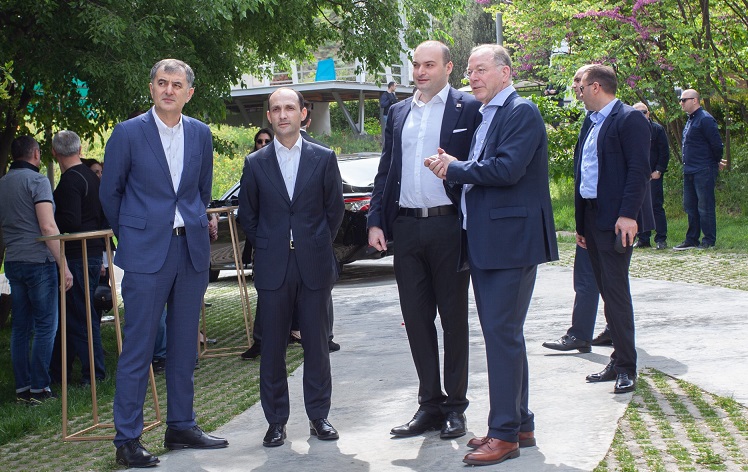 Morrison said that he is ready to take the responsibility. Photo: Prime Minister's press office.

The ombudsman will be tasked to write recommendations regarding important environmental issues, as well as about the changes which should be carried out in the law. He will take part in public discussions and consult interested parties,” Davitashvili said.

Davitashvili vowed that the ombudsman will take actions to improve conditions of the people who work in the environmental field in Georgia.

Morrison said that he is happy to take the responsibility.

You know that I am a lawyer by profession and for now the Georgian environment will be my client and I will protect its interests,” Morrison said.

Morrison chaired CNF between 2008 and 2016. He has been involved in the implementation of environmental projects in Georgia since 2008.

Before becoming the chair of CNF he was widely recognised as one of Europe’s leading financial lawyers.

During his 28-year career at Sullivan & Cromwell LLP (S&C), he advised principally on capital markets transactions of all kinds, including many of Europe’s most important privatizations, CNF reports.

Morrison also served as vice chairman of the board of the Bank of Georgia, one of the leading commercial banks in Georgia.

A citizen of the United States, Morrison graduated from Yale College, received his law degree from University of California (UCLA), and was a Fulbright scholar at the University of Frankfurt.