Georgia has been officially handed the status of the Guest of Honour of the Frankfurt Book Fair on the final day of the major international book event, as the country begins gearing up to bear the title at next year's fair.

On Sunday, the Georgian representation at the annual event were handed over the status by France in a ceremony involving authors, publishers and officials from the two countries.

The occasion featured a symbolic gift from the French side to mark the handover, as Georgian National Book Centre Director Medea Metreveli received a scroll with a paragraph from The Knight in the Panther's Skin, an iconic medieval poem by Georgia's national poet Shota Rustaveli.

This is a great victory for the Georgian literature, and I would like to congratulate all Georgian authors and wish them a beautiful year 2018, full of emotions and joy. We all did this together and thank you to everyone", Metreveli said following the handover.

Georgian Publishers and Booksellers Association Deputy Chairman of Board Gvantsa Jobava told reporters the industry professionals involved in Georgia's preparations for the 2018 fair were looking to use the time until next year's event to translate and publish Georgian literature in "European and Eastern languages".

Author Lasha Bugadze called the adoption of the Guest of Honour status by Georgia a "widening of the literary geography" for the country and its writers. Bugadze's works have been translated for the German publisher by award-winning author Nino Kharatishvili. 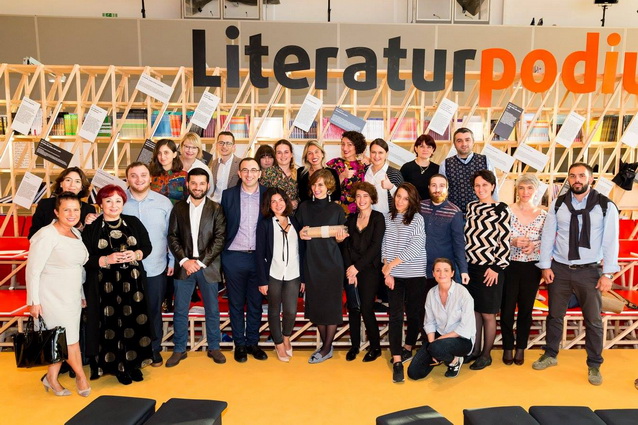 Georgia’s participation in the 2017 fair marks ongoing celebrations for 25 years of diplomatic relations between the two countries. The year-long celebrations involve cultural events including exhibitions and screenings in Georgia and Germany.

The participation of the country in the 2018 event as official Guest of Honour is anticipated to promote the country's literary scene as well as contribute to tourist interest and bring the attention of international media to Georgia during the annual fair.

Sunday's Guest of Honour handover concluded with a performance by United Kingdom-based Georgian singer Katie Melua and the Gori Women's Choir at the fairgrounds.