Georgian author Zurab Karumidze’s novel Dagny, or a Love Feast has been selected among top 10 books published in Germany, in a monthly rating by the country’s second largest broadcasting organisation.

The novel was unveiled in third place of the top 10 Books of the Month of February by Suedwestrundfunk (SWR) 2, a regional broadcasting company serving an audience of over 14.5 million.

Georgian writer Zurab Karumidze [...] has in his novel made [the] femme fatale Dagny the leading figure in a brilliant contest for the culture and bohemia of the [turn of the century]”, said the SWR2 selection of the book.

Karumidze’s work has been listed alongside works by authors including Austrian authors Arno Geiger and Peter Handke as well as German writer Angelika Kluessendorf.

The ranking, published by SWR2 for four decades, is composed of selections made by a jury of 25 literary critics and reporters from German-speaking countries.

The broadcasting company, part of the ARD consortium, serves the states of Baden-Wuerttemberg and Rhineland-Palatinate.

Dagny, or a Love Feast was made available to German-speaking readers following its release and presentation at the Frankfurt Book Fair last year.

It is an eclectic novel involving a maze of characters from different eras in the multi-cultural setting of Georgia's capital Tbilisi. 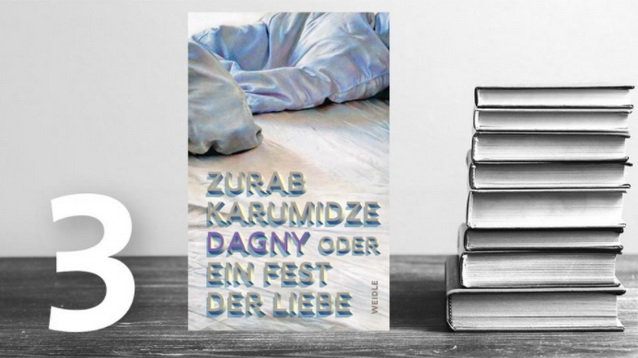 The German-language cover for the novel 'Dagny, or a Love Feast'. Photo: www.swr.de.

Selected for the Dublin International Literary Award longlist in 2012, the novel initially appeared in English, as its author intended the work for non-Georgian speaking audiences.

Translated from English by Stefan Weidle, it became available to literature enthusiasts in German following its publishing by Weidle Verlag in September.

The translation of the novel was made possible by the Georgian National Book Centre within its program of making Georgian literature available in foreign languages.

The centre will also host a presentation and reading of the book at the upcoming Leipzig Book Fair in March.

Dagny, or a Love feast has been reviewed by literary critics in influential German publications including Frankfurter Allgemeine Zeitung and Sueddeutsche Zeitung.

Its author Zurab Karumidze has written novels, short stories and collections, with his literary work on jazz winning the Georgian literary award Saba. He has also edited essays on politics and culture in Georgia.