A work by artist Levan Lagidze became the latest piece by a Georgian painter to be sold at New York’s Shapiro Auctions after it was acquired by a collector last week.

Lagidze’s untitled painting was sold to an undisclosed collector for $31,250, after it was auctioned within Lot 65 at the event.

The 2012 oil painting was made by the artist in the form of a diptych – a two-piece artwork fixed to a hinge allowing it to be closed like a book.

Organisers of Shapiro Auctions have auctioned dozens of works by Georgian artists over the last two years.

Some of the painters whose creations have been part of the auction’s events are Merab Abramishvili, David Kakabadze and Lado Gudiashvili.

Born in 1958, Lagidze graduated from Tbilisi State Academy of Arts in 1981 and worked in themes including early urbanism as well as biblical themes including The Prodigal Son and abstract perspectives. 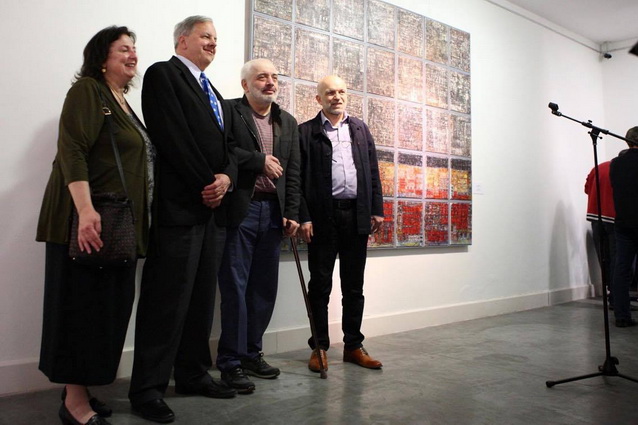 Lagidze with US ambassador to Georgia Ian Kelly (second from left) and Georgia’s former ambassador to US Archil Gegeshidze (far right) at the exhibition ‘Bach Exercises’. Photo: Lagidze Gallery.

In the 1980s Lagidze established a creative arts studio within the Tbilisi Painter’s House, hosting workshops and offering free workspace to emerging artists.

With the same goal of creating a venue for artists he launched the Tbilisi-based Lagidze Gallery in 2011, which hosts exhibitions, presentations and talks in Georgia’s capital.

Lagidze’s own works can be found in collections of venues including the Tretyakov Gallery and the Modern Art Museum in Moscow and Zimmerli Art Museum at Rutgers University in the United States.

The painter has also featured in exhibitions at venues including the Modern Art Museum in Kuwait City in Kuwait, Artbull Gallery in London and TMS Gallery in Tbilisi.