Crime that was allegedly committed on the territory of Georgia will be under the jurisdiction of the International Criminal Court (ICC), no matter if one side of the conflict is a member of the Rome Statute or not,” top ICC prosecutor Fatou Bensouda  told Georgian media today.

Bensouda was still awaiting approval from the ICC in The Hague, Netherlands to approve her request to investigate alleged instances of war crimes and crimes against humanity, and had travelled to Georgia to meet with local officials.

ICC prosecutor Fatou Bensouda must wait for confirmation from International Criminal Court Judges to investigate the Russia-Georgia war of 2008.

Bensouda clarified to local media that unlike Georgia, Russia was not among the 123 member states that adhered to the Rome Statute however the ICC could still investigate allegations of possible crimes committed on the country who was part of the treaty – in this case Georgia.

Georgia’s Justice Minister said the meeting with Bensouda was encouraging and noted some of the main directions of the investigation related to alleged ethnic cleansing of Georgian citizens in Tskhinvali, torturing of Georgian captives and inhumane treatment of Georgian soldiers.

In her earlier statement Bensouda said 75 percent less Georgians lived in de-facto Tskhinvali after the war. And she said that topic will be the subject of a thorough investigation,” Tsulukiani said.

We also agreed the investigation would not be comprehensive if [Bensouda] did not investigate the torture of Georgian soldiers Giorgi Antsukhelidze, Kakha Khubuluri, Ushangi Sopromadze and 23 others,” Tsulukiani added. 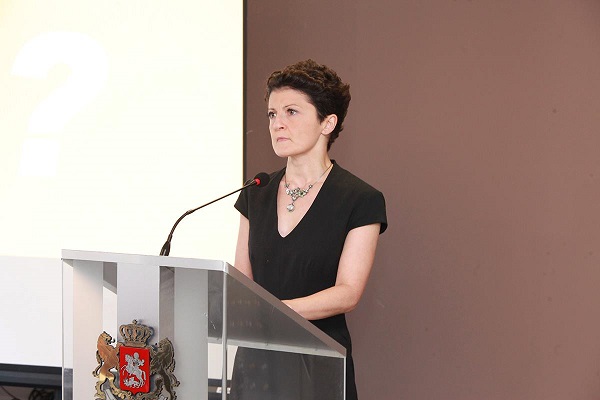 Georgia's Justice Minister says all Georgians should stand together to prove the country's truth in the 2008 war. Photo by Ministry of Justice of Georgia.

Georgia’s Justice Minister urged individuals affected by the war to address the ICC in the next 30 days and request to be questioned and support the prosecutor’s motion to investigate the war.

Two days ago the Georgian Minister stressed the Georgian side was ready to provide all necessary documents to the ICC prosecutor to assist her in her investigation.

On October 14 Bensouda filed a request with the ICC to investigate alleged instances of war crimes and crimes against humanity that took place during the short but violent clash seven years ago in Georgia. In her request Bensouda stressed there was "reasonable evidence” crimes had been committed during the armed conflict.

Russia’s relevant bodies have already stated that only Georgia was to blame to the war and said they were skeptical of the planned investigation.