A new National Bank of Georgia-issued collector coin, bearing visuals of the country's medieval icon Queen Tamar, has been presented to five-time World Chess Champion Nona Gaprindashvili, in recognition of her achievements in the sport.

NBG president Koba Gvenetadze revealed on Thursday employees of the bank had raised money for the latest coin, with the decision on whom to present it made "instantly and unanimously".

Gvenetadze said "[Gaprindashvili], like Queen Tamar, competed equally with men in a field where women's widespread success was unimaginable", making a parallel between the successes of the monarch in ruling the country between 1184-1213, and the chess professional's dominance of women's international scene between the early 1960s and late 1980s. 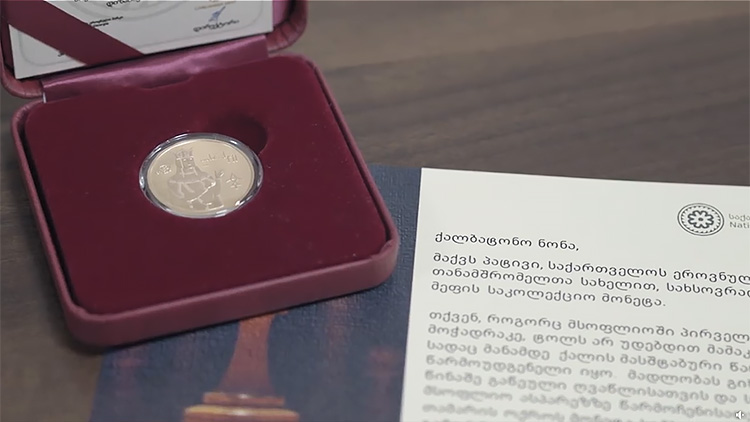 The collector coin presented to Gaprindashvili by the national bank. Screenshot from National Bank of Georgia video.

Previous releases include coins dedicated to the 2020 Summer Olympic Games, the centenary of the parliament of the First Democratic Republic of Georgia, and the Georgian national rugby team.

The recognition of Gaprindashvili's feats in chess come as the national legend is involved in a lawsuit against Netflix for alleged defamation, with her legal challenge based on the company's reference to her in the popular TV series The Queen's Gambit.

The legacy of Gaprindashvili - and the generation of her fellow Georgian women players who achieved fame in the past century - has been recently honoured by the documentary Glory to the Queen. The film by Tatia Skhirtladze and Ana Khazaradze will be screened at Trieste Film Festival in Italy later this year.