Regional Development and Infrastructure Minister: $11 billion to be spent in 10-Year Development Plan

The Georgian Government will spend ₾32 billion (about $11bln/€10bln) over the next 10 years in developing infrastructure and raising living standards of citizens, Irakli Karseladze, the Minister of Regional Development and Infrastructure, said on Wednesday.

Speaking in the Minister's Hour format at the Georgian Parliament, Karseladze said the construction of all planned highways would be completed by 2030, adding a total of 512km of roads were rehabilitated over the past two years and noting plans to rehabilitate and maintain up to 600km of road infrastructure in the country.

The Minister noted the 2021-launched Renewed Regions programme initiated by the Prime Minister of Georgia was “unprecedented in its content and scale”, adding urban renewal works were underway in 63 municipalities of Georgia, with some already completed. The works in the first phase of the programme have been estimated at ₾500 million (about $175mln/€164mln), with the second phase currently having a budget of up to ₾300 million (about $105mln/€98mln).

Karseladze said that with an annually growing budget over the last eight years for the planned development of water supply infrastructure, the task would have a “historically high” funding of ₾380 million (about $133mln/€124mln) this year. Under the ongoing ₾3 billion (about $1bln/€984mln) project, water supply will be improved for an additional 585,000 beneficiaries at 182 locations, of which 200,000 have never had access to 24-hour supply.

The Minister also addressed the “significant progress” made in solid waste management, including the construction of five waste transfer stations. Karselsadze added municipalities had been provided with over 160 units of modern special equipment and more than 20,000 waste collection containers. He also noted out of 54 municipal landfills, 24 existing old landfills had been closed and 30 were being systematically maintained and rehabilitated. 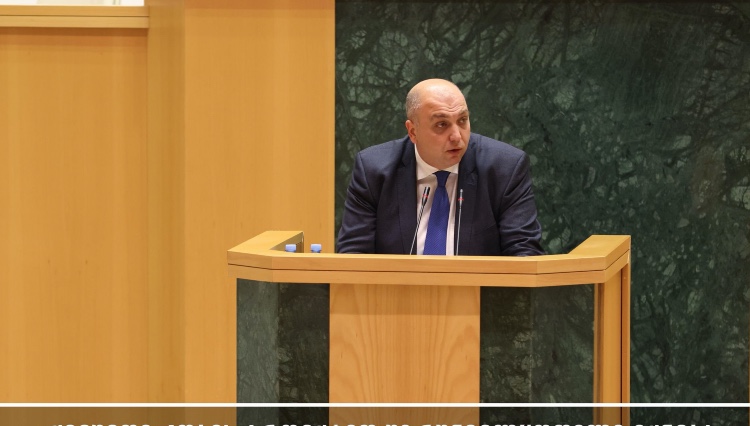 Photo: Ministry of of Regional Development and Infrastructure.

The official also told MPs “2021 was a year of development of sports infrastructure,” with the successful completion of international standard stadiums in Khashuri and Poti in Georgia’s west, as well as the adaptation of the stadium in the city of Zugdidi. Sports complexes were being built in the major cities of Rustavi, Zugdidi and Akhaltsikhe, while the western hub city of Kutaisi was seeing construction of an Olympic Pool, he noted. The Minister also noted rehabilitation of existing venues to hold the 2023 UEFA European Under-21 Championship.

Karseladze reaffirmed the Government’s support for highland settlements and localities adjacent to the administrative line bordering the occupied territories of the country. He noted preparatory works were underway in the village of Zardiantkari in central Georgia’s Gori Municipality for rehabilitation of 28 houses damaged by the 2008 war.

The Minister also mentioned the “great support” of the European Union in institutional and infrastructural development of municipalities, and mentioned the Integrated Regional Development Pilot Programme for 2020-2022 was being “actively implemented” with a total budget of ₾200 million (about $70mln/€65mln). Under the programme, over 140 infrastructure projects worth approximately ₾142 million (about $49mln/€46mln) have been funded, of which approximately 20 percent have already been completed.