Georgian Prime Minister Irakli Garibashvili and opposition politicians have gathered at the presidential palace in Tbilisi at a meeting mediated by European Council President Charles Michel.

Michel said following the meeting that the political dialogue in Georgia 'is relaunched tonight' and the leaders of parties had an opportunity to listen to each other. However, he said, ‘we understand that there are many difficult topics that need to be tackled by the political actors’.

I proposed the support of the EU in order to encourage all the possible efforts on the different elements”, Michel said.

He then noted that at the upcoming EU-Georgia association council in two weeks in Brussels, the EU will ‘observe’ the progress made in Georgia ‘on different difficult topics’.

The European Council has released video footage of the meeting:

However, Michel added that the main message is the following: 'what counts for the EU is the protection of the interests of the Georgian citizens'.

In this country there are many difficult and complex challenges: the economic development, the social cohesion, Covid-19, security, stability - these are very essential challenges that need to be tackled. And that's why it's urgent, it's urgent to solve this political crisis", Michel said after the meeting.

The European Council President also said that tonight he is proud that an important step 'into the right direction' has been made.

He said although, it 'does not mean that everything is solved', but all the participants have expressed their willingness 'to strengthen the political dialogue' in order to find solutions together.

Although their demands remain unchanged and include repeat parliamentary elections and release of political prisoners, opposition politicians who refuse to take up their parliamentary mandates welcomed the dialogue. However, they plan to continue peaceful demonstrations.

It is clear for our European partners that if we want to reach the goal both parties have to express their political will for the agreement”, United National Movement member Salome Samadashvili said.

Noting that the opposition has factually confirmed their willingness tonight, Samadashvili said ‘the negotiations had come to a deadlock’ because of the government’s decissions. 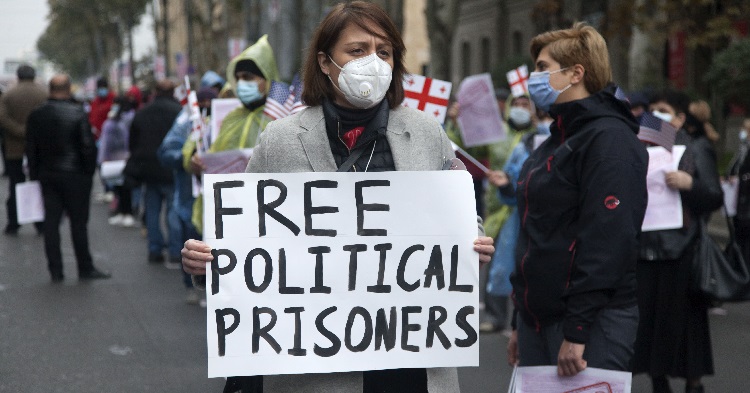 Only six of 60 opposition MPs have entered new parliament so far. Those refusing to take up their mandates have been holding protests rallies since last October. Photo: Nino Alavidze/Agenda.ge

Hailing the political and diplomatic skills of Charles Michel, the Labour Party chair Shalva Natelashvili thinks that ‘a hopeful spring is coming’.

Nevertheless, Natelashvili believes that only repeat parliamentary election - which is the number one issue on opposition’s agenda - 'should change not only the government but our lives for the better'.

On his part PM Garibashvili noted that despite their differences the meeting was held in a ‘rather constructive atmosphere’.

We agreed that the dialogue will continue. I will have consultations with the political council of the party and we will set further steps”, Garibashvili told journalists stressing the importance of finding ‘common national consensus’.

Thank you @eucopresident for your personal efforts in strengthening the ???????????????? strategic partnership. ???????? remains an exemplary ally&partner for the ???????? in the region&beyond. We remain loyal&diligent on our path to EU membership. We reiterated our readiness for political dialogue.

Unrest in Georgia was sparked after the recent Tbilisi City Court ruling which said that the opposition United National Movement chair Nika Melia be remanded into custody for failure to post bail for his release in a case that dates back to the June 2019 protests.

The time has come to move from facilitation to mediation.

I have invited them to a meeting tonight. pic.twitter.com/lcisUL73q5

Responding to the opposition’s demand the ruling party however says any discussion on holding repeat parliamentary election is not on agenda.