The importance of the European Union's ongoing support for the Eastern Partnership states, and a "shared vision" of Georgia, Moldova and Ukraine of their membership in the EU were among the messages in opening speeches of presidents Maia Sandu and Volodymyr Zelensky at this year's Batumi International Conference on Monday.

The leaders of the two states were among speakers launching the one-day conference in Georgia's seaside city, where they and Georgian officials are joined by European Council President Charles Michel in discussing the Eastern Partnership as part of the agenda.

In her brief opening remarks for the conference Moldova's president mentioned the tasks and challenges for the three states aspiring to join the EU, while also stressing the impact of the Union's support in reforms and other areas for the EP countries.

We do need your support, but we understand that the homework is to be done by us. And this is the commitment that we have, first of all, towards our people, and [...] for the EU institutions that have been helping us over the years

In his more expansive comments at the launch of the conference, Zelensky talked about challenges posed by the ongoing occupation of parts of Ukraine and Georgia by Russia and de-facto authorities backed by it, also mentioning other forms of aggression directed at the two states. 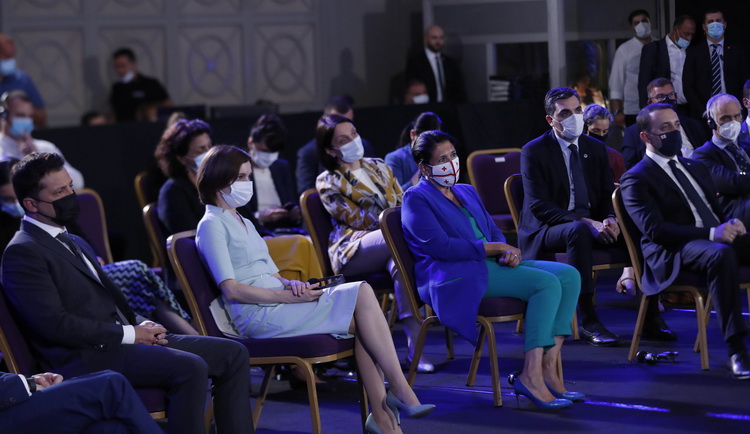 Presidents of Ukraine and Moldova joined their Georgian counterpart Salome Zurabishvili (third from left) and other Georgian and EU officials in the conference that launched today. Photo via President of Georgia press office.

Zelensky said the difficulties - including "proxy attacks" and "annexation" - were a "temporary price" paid by EP states for their aspirations of EU membership, adding the longevity of the challenges would partly depend on the scope of support for the states from the EU.

Reforms in legislative systems, in combating corruption and opening up the economy of Ukraine over the past few years were also parts of the president's address, with Zelensky also stressing the next Eastern Partnership summit in December would need to be more tangible than holding "summits for the sake of summits".

We need geopolitical contents and geopolitical visions of the future for this initiative in particular [...] our next summit should demonstrate clear-cut vision of relations with [...] partners on the part of the European Union

The leader of Ukraine's government also said the three countries of the partnership had a "shared vision of tomorrow - [...] full membership in the European Union, equality, freedom and democracy".

Adding he was happy to see the partner nations "paving the way to such integration together", Zelensky also expressed his confidence that the cooperation would see the states "find out place in the ranks of the European Union".

The 17th edition of Batumi International Conference launched in the Black Sea city earlier on Monday, with the event hosted by the Georgian foreign ministry welcoming Eastern Partnership state dignitaries, EU officials and international experts to discuss the "upgraded level" of the EP platform and the EU's transatlantic affairs with the United States.