Georgian Prime Minister Irakli Garibashvili, along with his Ukrainian and Moldovan counterparts, Denys Shmyhal and Natalia Gavrilita, has discussed ways how to strengthen ties with the European Union (EU) and the steps which will facilitate the European integration of the countries.

Georgia, Ukraine and Moldova are the three associated partners of the EU which launched the format of the Associated Trio earlier this year.

The main purpose of the Associated Trio is to strengthen the EU's Eastern Partnership initiative and ensure joint efforts for European integration. 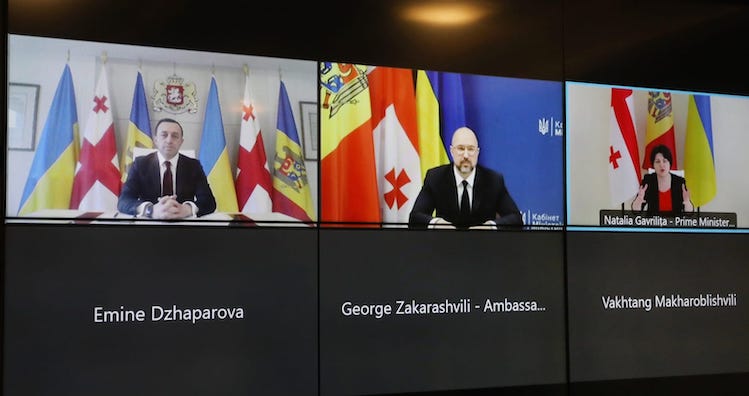 Garibashvili, Shmyhal and Gavrilita have stressed the importance of the memorandum signed between the Associated Trio on May 17, 2021, and the intensification of dialogue and cooperation on European integration issues. Photo: Government of Georgia.

The meeting also touched upon the intensification of relations between the Associated Trio and the EU, including the importance of establishing sectoral dialogues,” the government of Georgia press office said.

Garibashvili, Shmyhal and Gavrilita have praised the efforts made within the Associated Trio.

Eastern Partnership Summit scheduled for December was also on the agenda of the online meeting, where the expectations for the future goals of the partnership were discussed.