Georgian citizen Malkhaz Vanishvili (Kurtaevi), who lives in the village of Khurvaleti near Russia-occupied Tskhinvali (South Ossetia) region, attempted suicide on January 19 after occupation forces forcibly have separated him from his pregnant wife, Tatia Adikashvili, several months ago.

RFE/RL reports that Malkhaz Vanishvili was transferred to a hospital in occupied Tskhinvali region yesterday after he took pills allegedly with the intention to commit suicide. His life is no longer in danger.

Tamta Adikashvili, a sister of Vanishvili’s wife, told RFE/RL that Malkhaz wanted to visit his pregnant wife on January 19, though border guards did not allow him to cross the so-called border.

Malkhaz Vanishvili is the grandson of Davit Vanishvili, whose house and agricultural lands are divided in two by occupying forces for several years now. 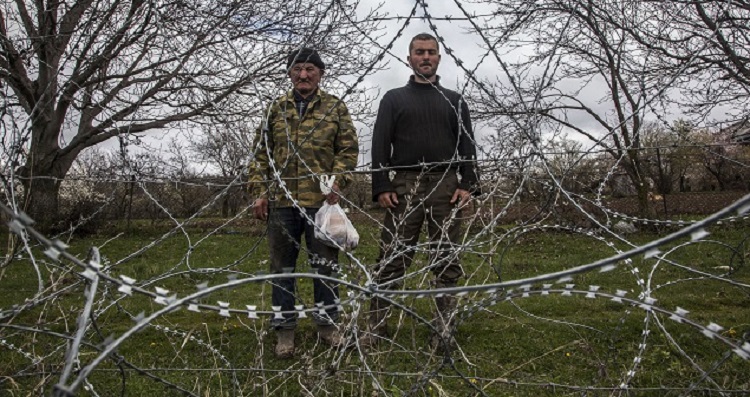 On April 18, 2020 Malkhaz Vanishvili and his wife were illegally detained by occupying forces.

After the detention they were taken to occupied Tskhinvali.

On December 17, 2020 Tatia Adikashvili was expelled from the occupied territory and since then she has not seen her husband.

Nine-months pregnant Tatia Adikashvili is living in the non-occupied area of the village of Khurvaleti currently.

Malkhaz Vanishvili has both Russian and Georgian citizenship. He was born in the eastern city of Gori and grew up with his grandfather in the village of Khuraleti.

About 10 months ago they got married and moved into the house of Davit Vanishvili to live together.

In the past Davit Vanishvili had been arrested multiple times and taken to Tskhinvali by Russian border guards for allegedly attempting to cross barbed wire fences which is only a couple of metres beyond his property.