Can you imagine how politics and conflict can make you lose your forefathers?

In the Georgian village of Khurvaleti, aggressive politics by the Russian side saw the local population and the village cemetery divided into two isolated parts.

Now, the people of Khurvaleti and the graves of their loved ones lie on different sides of barbed wire fence that mark the Administrative Boundary Line (ABL) between Georgia and breakaway Tskhinvali (South Ossetia). The barbed wire fence cannot be crossed. Never, under any circumstances.

The intensity of the situation is felt particularly at Easter, as families are unable to visit the graves of their loved ones in the nearby cemetery, which lies just beyond the fence.

This year Agenda.ge’s photographer Nino Alavidze and I travelled to the villages that border the ABL, and spent Easter with the people who live there and are affected heavily by the barbed wire fences. 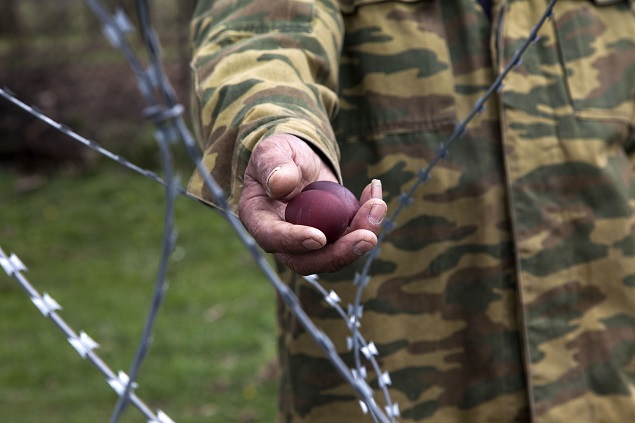 Easter behind the barbed wire fence. Photo by Nino Alavidze/Agenda.ge

For Georgians, the most traditional part of an Easter celebration is visiting cemeteries and rolling an Easter egg on the graves of their beloved on Monday following Easter. Because of the barbed wire fence which acts as an artificial border in Khurvaleti and nearby villages, locals are now unable to follow this tradition.

Khurvaleti now borders Tskhinvali region (South Ossetia), one of Georgia’s two breakaway regions, which was the epicenter of the short but deadly Russia-Georgia war in August 2008.

After the war, Russian border guards set a new Administrative Boundary Line (ABL) between Georgia and its breakaway region, erected 50 km barbed wire fence along this arbitrary line through Georgian villages and announced it was the new "state border”. Then and now, any attempt Georgian villagers make to cross the barbed wire fence is treated as "violating the state border” and the "offenders” are arrested and taken to Tskhinvali prison. Moscow calls this "border security” while Tbilisi and the rest of the world call it "creeping occupation” of Georgian land. 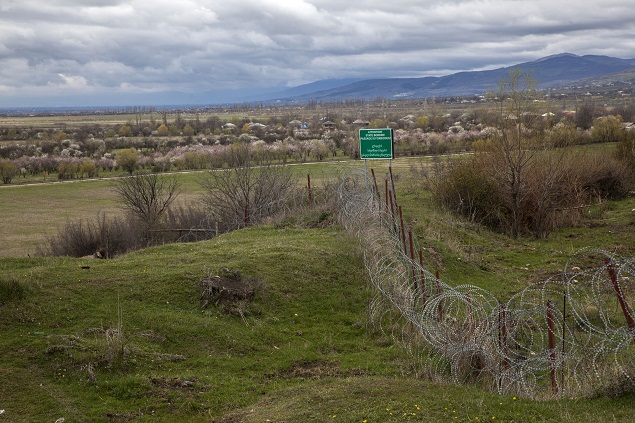 An old man wearing blue jeans, a military jacket and a black hat comes out of the house and slowly approaches the barbed wire fence. 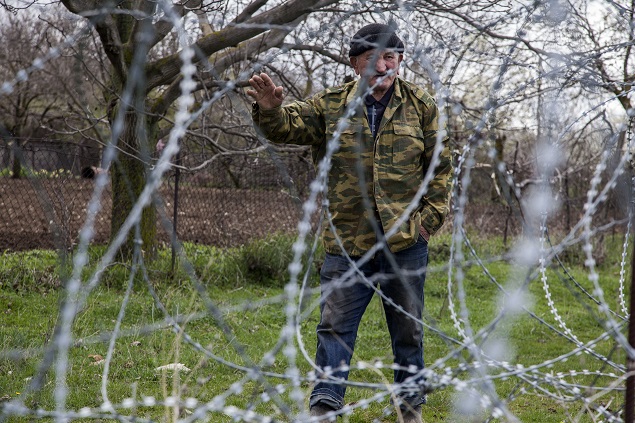 Data Vanishvili, 82, is not allowed to cross this barbed wire fence. If he does, he will be arrested. Photo by Nino Alavidze/Agenda.ge

"Data Papa, how are you?” the young man says. "I brought you some paska and eggs… could you go to our grave too?”

The old man’s name is Davit (Data) Vanishvili and he is 82 years old. The occupation line has isolated his house from the rest of Khurvaleti village. He is also separated from his wheat field – which formerly was his means of generating an income. But alas, the erection of the barbed wire fence meant his crops would be always out of reach.

Vanishvili, his bedridden wife and 25-year-old grandson Malkhazi (Makho) are the only people who were left behind the barbed wire fence in Khurvaleti. The village cemetery was on their side also. The rest of the village were on the other side.

For the third year now, at Easter the Khurvaleti neighbourhood and the Vanishvili family gathered on both sides of the barbed wire fence. Through the sharp, razor-wire fence the villagers handed the Vanishvili family Easter eggs, traditional Easter bread called Paska and candles, and asked them to visit each grave at the cemetery to pay their respects. 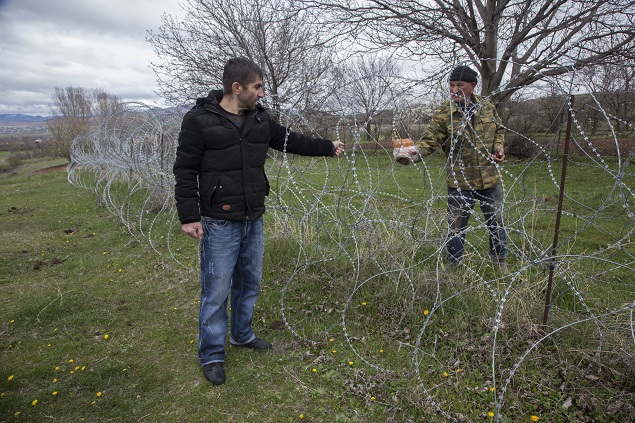 This is the only way of communication between Vanishvili and his fellow Georgian citizens. Photo by Nino Alavidze/Agenda.ge

Obeying this request, Makho Vanishvili went to the village cemetery and rolled an Easter egg on each grave on behalf of the families who were forbidden to cross the barbed wire. 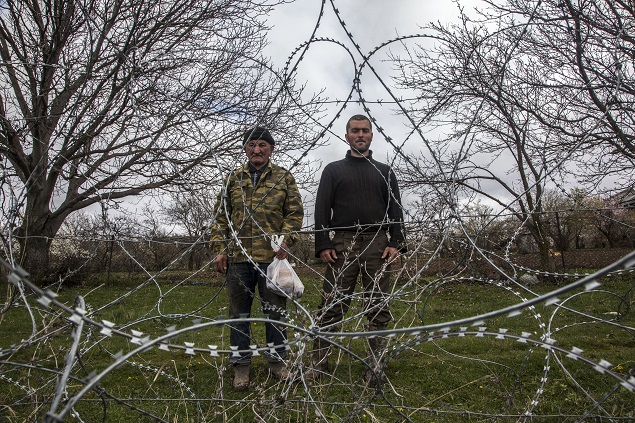 Data and Makho Vanishvilis are the only people who have an access to the village cemetery so they roll an Easter egg on each grave on behalf of the families who were forbidden to cross the barbed wire. Photo by Nino Alavidze/Agenda.ge

In the past the old man had been arrested multiple times and taken to Tskhinvali by Russian border guards for allegedly attempting to cross the barbed wire fence, which is only a couple of metres beyond his property.

Every movement across the occupation line is observed by Russian border guards and their cameras installed on nearby trees. The Vanishvili’s family can communicate with their fellow Georgian citizens by talking from either side of the fence without actually crossing it. 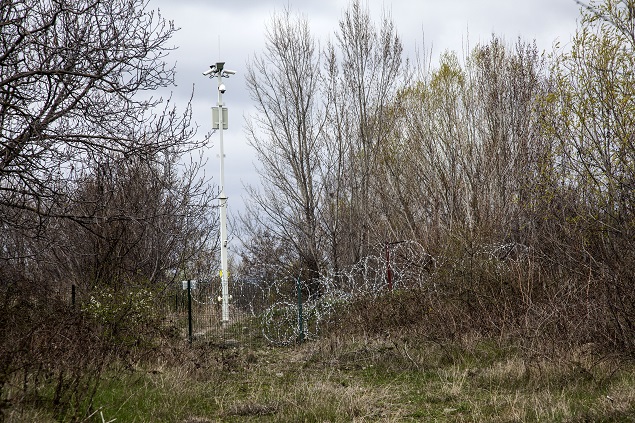 Ergneti, another Georgian village along the ABL, is our next stop.

In this village locals have no one who is able to visit the graves of their loved ones on the other side of the fence. The only possible way of carrying out the Easter tradition is by sliding a hand through the fence and rolling a red egg on the ground.

Lia Clachidze, who was born and raised in Tskhinvali but now lives in Ergneti, brought Easter eggs and candles to the ABL. After rolling an egg on the Tskhinvali ground, she lit a candle and stuck it to the fence. This was a moment that will stick with me for the rest of my life – it was possibly the saddest thing I encountered on that Easter day. 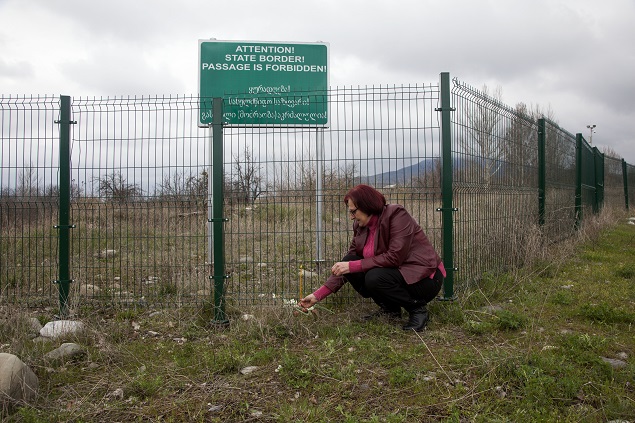 Lia Chlachidze lights a candle at the Tskhinvali-Ergneti de-facto borer after rolling Easter eggs on the Tskhinvali ground; Photo by Nino Alavidze/Agenda.ge 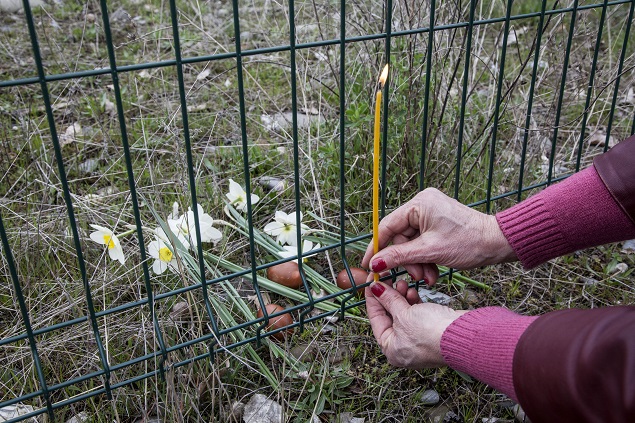 This is the only way of carrying out the Georgian Easter tradition in this area. Photo by Nini Alavidze/Agenda.ge

The body of Nodar Archvadze is buried in Ergneti. Archvadze died two years ago in Rustavi, a city situated 25km southeast of Georgia’s capital Tbilisi. This was where he settled after being internally displaced from Tskhinvali in 2008. 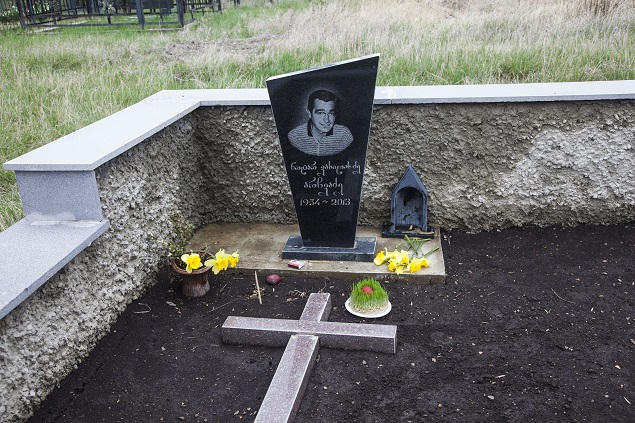 Nodar Archvadze's last will was to be buried as close as possible to his native town Tskhinvali so he was buried in the village of Ergneti. Photo by Nino Alavidze/Agenda.ge

But before his death, Archvadze asked his wife to bury him as close to Tskhinvali – his homeland – as possible. He was buried in Ergneti, the closest Georgian village to Tskhinvali.

Ergneti cemetery is full of bodies of people who had no connection to the rural village but wanted to be buried as close as possible to their native homeland Tskhinvali. Today, their family members are looking forward to the day when the barbed wire border is abolished and they can rebury their loved ones in Tskhinvali.

The barbed wire fences erected by the Russians not only affected the Georgians, but the Ossetians too. Marina Bepieva is an ethnic Ossetian who married a Georgian. After the 2008 war she was forced to leave her homeland Tskhinvali. 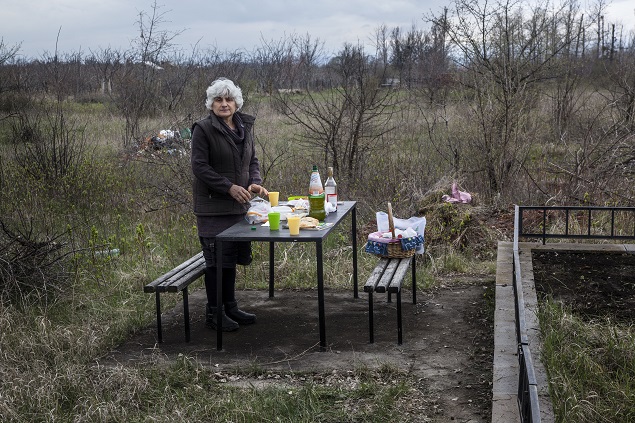 Today, she is visiting her parents-in-law’s graves in Ergneti. Her own parents, who have South Ossetian passports, live in Tskhinvali and she very rarely has the chance to see them. Although only a couple of kilometres separate Tskhinvali and Ergneti, her parents must cover hundreds of kilometers to cross the Larsi Checkpoint near Kazbegi in north-east Georgia if they wish to visit their daughter. This long route is the only official way to get to Georgia from Russia and vice versa. Before the war, there were none of these artificial barriers between the Georgians and Ossetians. 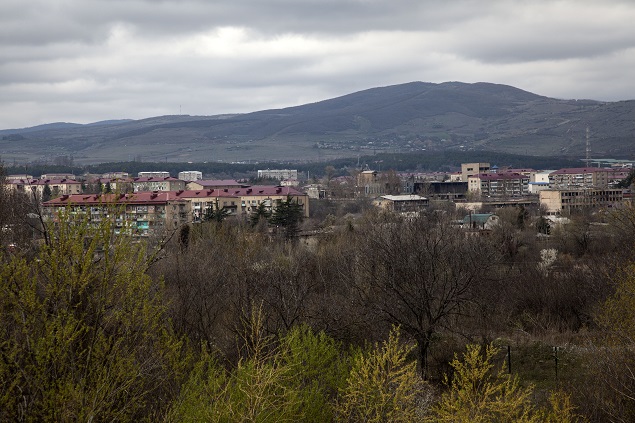 Tskhinvali, a view from the village of Ergneti. Photo by Nino Alavidze/Agenda.ge

No one knows when this tense situation will ease but until it does, Easter spirit cannot be fully felt in this troubled area.