Ruslan Abashidze, First Deputy State Minister for Reconciliation and Civic Equality of Georgia, was in the village to talk to residents whose land was cut by the fresh boundaries several days ago.

The wires were erected by the Russian forces who occasionally patrol across the occupied parts of the village and have an observation post set up on the side under their control.

The Russian troops strung about 30 metres of wire in the yard of local Guliko Kujoshvili, who lost a portion of her garden as a result.

Givi Batonisashvili, a neighbour of Kujoshvili, also found himself in difficult predicament as the soldiers cut down his orchard to set up a footpath for their patrols. 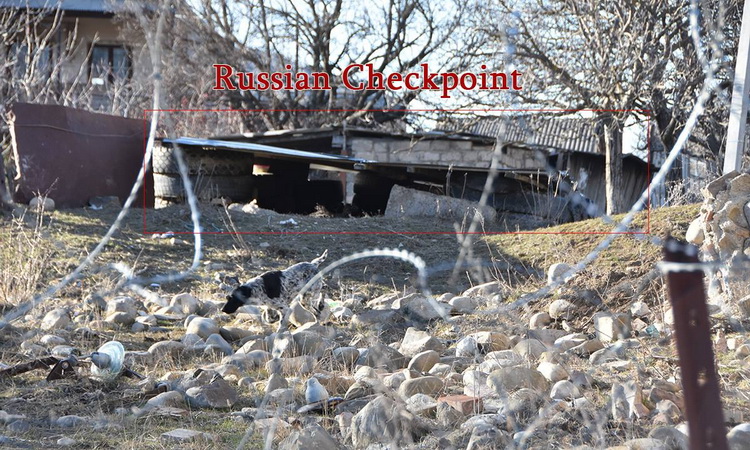 A checkpoint and observation post created by the Russian forces across barbed wire in the village. Photo: Roma Baindurashvili/Office of the State Minister for Reconciliation.

The occupation forces did not set up any barbed wire in Batonisashvili's garden, leaving him at a loss about new boundaries and at risk of being charged with "crossing the border" in any part of the garden.

The resident of Khurvaleti lives in his home with an ageing mother.

Meeting Batonishvili during his visit, Abashidze also talked to Tsiala Khuroshvili, another local whose son was previously detained by the Russian forces from his own garden.

Local Tsiala Khuroshvili talks about being afraid to visit her garden due to risk of being detained by occupying forces:

Khuroshvili told the Office of the State Minister for Reconciliation that following the incident she was afraid of visiting the garden and risk getting detained herself.

Following his meetings with the locals Abashidze said the new circumstances further complicated matters for them.

The first deputy minister noted his office was working to "use all available avenues" for helping the village's population in their new hardships.

First Deputy State Minister for Reconciliation Ruslan Abashidze reacts to the new developments in the village:

Khurvaleti is located just over 100km north-west of capital Tbilisi, near the administrative boundary line separating the Russian-occupied Tskhinvali from the rest of Georgia.

The village has been a hotspot for detainment of locals and construction of barbed wire by occupation forces for years.

Last month the Russian troops detained local Otar Samniashvili, for "illegally crossing the border" in the village, following a similar incident in September when Maia Otinashvili, a 37 year-old woman was also detained and taken to the city of Tskhinvali.

It is not always obvious where the occupation line is demarcated as Russian forces keep relocating the barbed wire installations marking it, a process informally referred to as a "creeping occupation”.