He said that the restrictions are expected to slow the pace of the spread of the virus and urged people to act in line with restrictions and recommendations.

No one has ever restricted freedom of expression in the country under the Georgian Dream leadership. To act in line with the restrictions which were demanded by epidemiologists, the pandemic and the current situation is not difficult,” Gakharia stated earlier today.

He said that the testing of 20,000 individuals daily will help the country reveal new cases in a timely fashion and prevent the further spread of the virus.

Gakharia stated that the draft of the 2021 state budget, which has already been submitted to parliament, ‘is balanced, and is focused on fighting with the pandemic, support for businesses and people and aims to prepare the state economy for the post-crisis period.’ 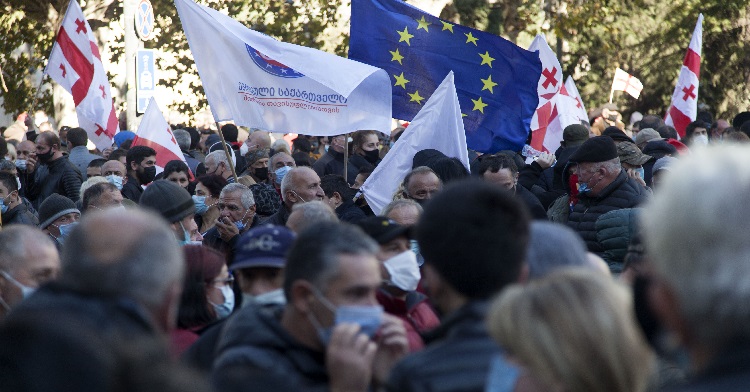 Opposition parties say that the October 31 parliamentary elections were fabricated. They refuse to take up their mandates and are demanding repeat elections. Photo: Nino Alavidze/Agenda.ge.

He said that per the second wave of support for people and the business sector, 1.4 billion GEL will be allocated.

280 million of the 1.4 billion GEL will be used this year, while 1,140,000 GEL will be spent next year and the money is included in the draft of the budget,” Gakharia said.

He stated that the budget also includes an additional 450 million GEL which will be spent for the treatment of Covid-19 patients, vaccination and testing.

Gakharia stated that ‘it is of top importance’ all parties who were voted into parliament to participate in discussions of the budget.