The US Department of State has released a long statement by its two senior officials (who have not been identified) earlier today, following the visit of US state Secretary Mike Pompeo to Georgia.

The statement encourages eight Georgian opposition parties to stop election-related rallies and take up their mandates.

The EU ambassador and I have been hosting a series of meetings with all the parties, but several of them with all the parties together to try and see if they can negotiate a solution to the impasse, because what we are encouraging is the opposition to fight this – fight for change within the parliament, don’t boycott again, because they have – their sort of reflex is to take it to the streets and boycott.  And we’ve been encouraging them to fight for change within.  You’ve been elected by your supporters to go into the parliament and make change,” said the first senior State Department official, who is allegedly the US Ambassador to Georgia Kelly Degnan.

The official said that Georgia has been working on its democracy for 20 years. 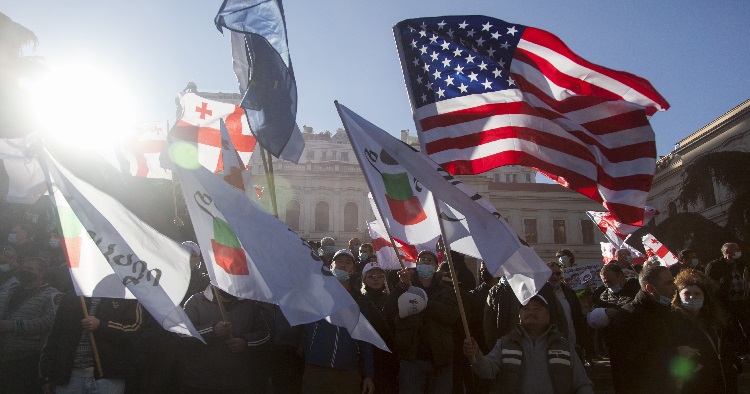 The opposition leaders, who have met with Assistant Secretary Philip Reeker earlier today in Tbilisi, stated that rallies will continue. Photo: Nino Alavidze/Agenda.ge.

The United States has been helping them, but they still are in the process of building independent institutions, and I think that’s what we saw with these elections.  They are – they’ve had flawed elections pretty much for the last 30 years and we saw similar types of violations this election as well: vote buying, voter intimidation, the abuse of administrative resources in terms of bringing civil servants out to vote,” the official said.

The official stated that ‘so many assessed, as did OSCE, that these were competitive elections, better in some ways – less hate speech, less of some of the more aggressive tactics before the elections.’

It was also noted that official results of the elections ‘were very within, in some cases, percentage points of the PVTs that were done by the local observers’.

Wheels up from Georgia! I had productive conversations with my counterparts, and am confident that our strong, dynamic bilateral relationship is firmly grounded in our shared values and commitment to Georgia’s territorial integrity. pic.twitter.com/utv1S4aN5t

And so it wasn’t immediately clear that these were sort of fatally flawed elections.  How much worse than previous ones that had not been challenged with calls for new elections?  And again, we were encouraging everybody:  use the legal processes you built over the years to adjudicate these claims,” said the official.

The second official also made the same encouragement to the opposition.

Use the (state) institutions.  Don’t just boycott them and achieve your gains that way,” the official said.

Pompeo did not meet with the Georgian opposition while in Georgia. However, a meeting was held by Assistant Secretary Philip Reeker.

Following the meeting in central Tbilisi opposition representatives said that ‘we will continue rallies. Repeat elections must be held.’