The ruling Georgian Dream party says that it has won the elections as all exit polls released by four different TV channels have put their vote count between 41-55 %.

Meanwhile opposition parties, citing the exit poll commissioned by the opposition-minded Mtavari Arkhi and their own parties, claim that the Georgian Dream only received a bit more than 30 per cent in the proportional elections. 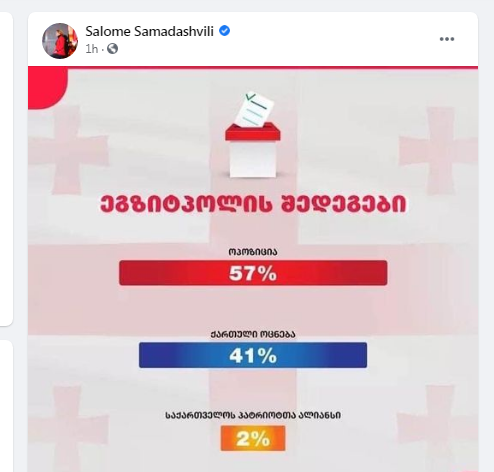 UNM member Salome Samadashvili said that the opposition received 57 per cent of votes in the elections, while the ruling party 41 per cent.

One of the leaders of the United National Movement Zaal Udumashvili said that ‘it is a big day in the history of Georgia. The day when the Georgian Dream was defeated.’

The third President of Georgia, and now a citizen of Ukraine, Mikheil Saakashvili has already called on the opposition to cooperate to form a coalition government.

Georgian Prime Minister Giorgi Gakharia has written on Facebook that ‘we have won. We have conducted an exemplary, free, fail and democratic election despite the pandemic.’

“We have shown the whole world once again that we are an inseparable part of the European civilisation and we deserve our dignified place in a big European family, and we will take that place!”

Georgian Dream leaders Archil Talakvadze and Kakha Kaladze stated that ‘not only the Georgian Dream, Georgia won the elections.’

They said that winning the party means that the  country’s democratic development will continue.