Georgia will be the first country in the region to launch negotiations with China about free trade, said Georgia’s Prime Minister Irakli Garibashvili after meeting his Chinese counterpart Li Keqiang in China today.

The Georgian official is on a working visit to China to attend the World Economic Forum.

At the meeting both sides highlighted that under the current Georgian leadership the two countries’ relations had developed and become especially fruitful, announce the Prime Minister’s press service. 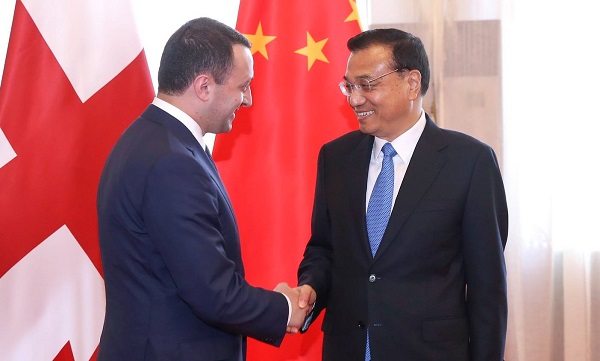 The major topics discussed between Garibashvili and Keqiang were the New Silk Road project initiated by the Chinese government, Georgia’s role in the route that envisaged connecting of Europe and Asia and future investments of the Asian Infrastructure Investment Bank (AIIB) to Georgia.

Garibashvili stressed Georgia had already been the part of the Silk Road in the past and if the route was reinstated Georgia could again play "a crucial role” in connecting Asia with Europe on a more direct route.

We are definitely ready to become the part of the New Silk Road route. Our aim is to use Georgia’s strategic location as best we can,” said Garibashvili.

We want Georgia to be a place of peace, reconciliation and cooperation and not confrontation. This has been a historical mission of Georgia,” he added.

The Georgian official noted the New Silk Road project would be discussed in detail by officials in Tbilisi as well as at the Tbilisi Silk Road Forum, scheduled for September 15-16, where 200 Chinese guests were invited.

Regarding investments, PM Garibashvili said several Chinese companies had revealed their interest towards construction of the Anaklia deep sea port in western Georgia.

Garibashvili added Georgia was waiting for a $500 billion USD investment from AIIB and this financial support would bring immense benefits to the country.

Georgia is a cofounder of the Bank. Initially the Bank’s assets meet $100 billion USD but, as a final result, we are speaking about a $500 billion USD investment,” Garibashvili added.

Garibashvili and a Georgian delegation are in China attending the September 9-13 World Economic Forum in Dalian.