Georgia and China are one step closer to finalising a free trade deal that will facilitate increased business and trade turnover between both nations.

Over five days of negotiations, (May 9-13) held in China’s capital Beijing, Georgian and Chinese officials agreed free trade talks should be completed by the end of 2016 and the deals come into force in early 2017.

This was the second round of free trade talks after the first round was held in Georgia’s capital Tbilisi on February 22-23, 2016.

In the latest round of negotiations Georgia and China exchanged offers about the trade of goods and trade in services. The two countries made important progress to agree on customs procedures, rules of origin, sanitary and phytosanitary measures, technical barriers in trade, trade security measures, competition, protection of intellectual property and trade in services.

The sides planned to host the third round of negotiations in July 2016 in Tbilisi, and all following consultations to be held once every two months.

A free trade deal with China will be extremely beneficial for Georgia as it will facilitate increased business and trade turnover between the nations, said the Georgian Government. Thanks to the deal Georgia will be able to export its products to China – a market of 1.4 billion customers - without additional customs fees. 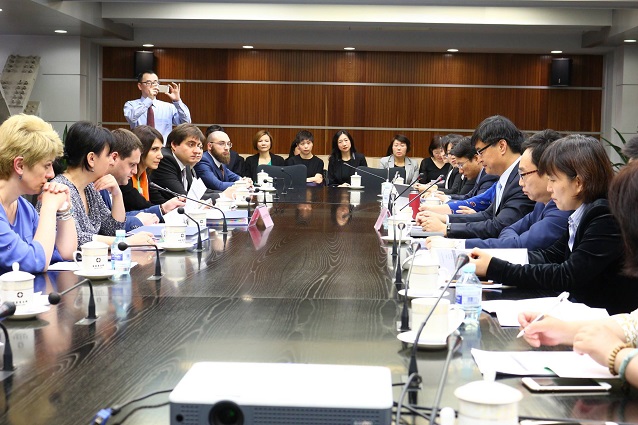 The second round of negotiations between Georgia and China on free trade was held on May 9-13 in China. Photo by Georgia's Ministry of Economy.

Establishing a free trade regime with China was initiated by Georgia’s former Prime Minister Irakli Garibashvili when he met his Chinese counterpart Li Keqiang in September 2015.

Last December the two countries signed a Memorandum of Intent (MoI) in China.

The MoI signing was significant because it signified the official start of negotiations on a Georgia-China free trade deal.

When the negotiations are complete and an agreement has been reached, Georgia will be the first country in the region to have this type of deal with China.

The friendly relations between Georgia and China was growing; more Chinese companies expressed interest in investing in Georgia. This was not confined to the business community – statistics showed growing numbers of Chinese tourists were more aware and interested in Georgia.