Signing the Association Agreement (AA) with the European Union (EU) is a day for Georgia to take a giant step toward free Europe, Georgia’s Prime Minister Irakli Garibashvili said in his address at the signing ceremony at the European Council in Brussels today.

Garibashvili described the signature of the Agreement as a "new great date in the chronicles of his homeland”.

He said for Georgia, this would help return the country to where it belonged.

"That is Europe, its political, economic, social, and cultural environment, from which our country was artificially alienated for centuries,” Garibashvili said.

At the beginning of his speech, he addressed participants of the ceremony speaking in Georgian language, and shared his emotions with them. He said today stirred great emotions and excitement within himself and in every Georgian. 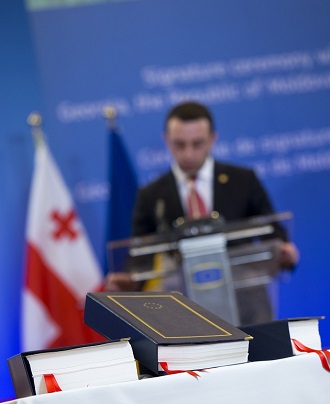 He believed his generation had been privileged to make the dream of his ancestors come true.

"It is very difficult to express in words what I feel and experience as a Georgian right now. I am convinced that everyone in my homeland is overwhelmed with the same emotions,” Garibashvili said.

He said today was the manifestation of Georgia’s democracy and European nature, and it was the beginning of a great journey to reinforce these values and ties.

"Georgia does not view Europe only as a political choice. We have shared common values and worldviews with Europe for centuries, and this is exactly what we value most. This is exactly why Georgia has always considered itself part of European civilization,” he noted.

PM Garibashvili during his remarks at the signing ceremony of Georgia's Association Agreement with EU. Photo by European Commission.

In his remarks, Garibashvili underlined that through gradual legislative harmonization with the EU, Georgia would achieve political association and economic integration with the Union and firmly anchor the country into European institutions.

Today, together with Georgia, the EU signed AA documents with Moldova and completed the signature process with Ukraine.

Garibashvili used this opportunity and extend his heartfelt congratulations to Georgia’s friends, the Ukrainian and Moldovan nations and his colleagues, on signing this agreement with the EU.

"I believe that it is symbolic to have our three countries sign this most important agreement today, which will not only bring us closer to Europe, but will also lay the foundation for ever-closer cooperation between Georgia, Ukraine, and Moldova, and will pave the way for our common European future,” he noted.

Georgia’s Prime Minister also believed the AA was the very foundation upon which Georgia’s European future would be built. Photo by European Commission.

The document was also signed by the EU’s 28 member state leaders.

Although it may take several years before all EU-member states ratify the agreement, the treaty envisages provisional application parts of the agreement even before EU members and the European Parliament complete the ratification process.

Georgian Parliament is expected to ratify the agreement in the second half of July.

After Georgia ratifies the AA, provisional application could start by October, 2014.