President of the European Commission Jose Manuel Barroso is calling the Association Agreements, which Georgia, Moldova and Ukraine signed today with the EU, as "the most ambitious document the European Union has entered into so far.”

The Association Agreement (AA), which includes the Deep and Comprehensive Free Trade Area (DCFTA) envisaged the gradual approximation of these three countries to the EU and as preparation for potential membership sometime in the future.

Speaking at the AA signing ceremony in Brussels today, Barroso stressed this agreement would enable Georgia, Moldova and Ukraine to drive reforms, to consolidate the rule of law and good governance.

President of the European Commission Jose Manuel Barroso during his remarks at the signing ceremony of EU-Georgia's Association Agreements with EU. Photo by Georgian PM's Press Office.

He believed the agreement would give an impetus to economic growth in the region by granting access to the world's largest internal market and by encouraging cooperation across a wide range of sectors.

"But let us be under no illusion. The task ahead is substantial. The Association Agreements' main objective is to help to deliver on the partner countries' own reforms, own ambitions,” he underlined.

Association Agreement - not against anyone

At today's ceremony, EU leaders reiterated that the Association Agreements are positive agreements and "are not against anyone.”

"They are meant to add more momentum to our partners' established international relations, not to compete with - or intrude in - our partners' relations with any neighbour,” Barroso added.

President of the European Council Herman Van Rompuy said the agreements were not the final stage of cooperation. In his remarks Rompuy said neither in this agreement or in the approach of the EU there was "nothing that might harm Russia.”

"EU stands ready to engage with Russia as much as it will be needed to misspell the misunderstanding and to chat together,” Rompuy added.

EU leaders also believed the agreement should not be seen as the end of the road.

"It is the beginning of a journey,” Barroso said.

He believed the three countries would fully benefit from the EU’s offer to continue efforts to transform reforms and deepen it democracy.

"This is your choice,” he added.

When Georgia’s Prime Minister Irakli Garibashvili was asked during an interview with American TV channel CNBC after the signing ceremony if Russia would retaliate against Georgia for taking closer steps towards the EU, Garibashvili responded that he did not "see no signs of complications with Russia.” 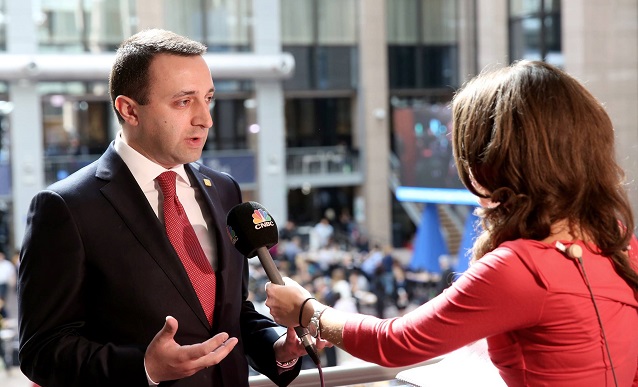 Georgia's Prime Minister Irakli Garibashvili during his interview with CNBC in Brussels on June 27, 2014. Photo by PM's Press Office.

"Since 2012 when our Government came into power we have started to rebuild relations with Russia; though Russia has also showed positive and cooperative steps too,” Garibashvili said.

At the news conference PM Garibashvili was also asked when Georgia would officially apply for EU membership. He responded that unofficially Georgia applied for membership today.

"Officially, it depends on progress that we will make but I can guarantee you that we will do our best to meet all the requirements of the European Union.”

When asked how long it might take for Georgia to become a member of the EU, he said it depended on them.

"In five years, maybe in ten years – we never know. It depends on progress Georgia will make.”

Below see the PM Irakli Garibashvili's interview with CNBC.