He stated earlier today that Nike Melia, current head of Saakashvili’s United National Movement (UNM) party, ‘will soon be removed from the post by Saakashvili’s decision.’

In his previous comments, Garibashvili said that Melia ‘strongly dislikes Saakashvili’ and that he is happy with the former president’s imprisonment.

He also commented on a video of Saakashvili exclusively released by Imedi TV yesterday, in which the former president is in a truck loaded with dairy products, heading from Ukraine to Georgia. 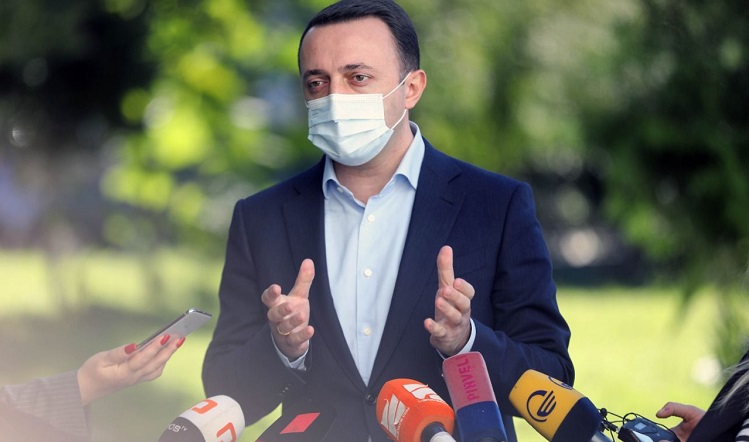 Garibashvili says that 'it is a shame' Saakashvili was running the country for nine years. Photo: government of Georgia press office.

The video shows that Saakashvili allegedly did not completely trust the truck driver Elguja Tsomaia, who supported Saakashvili in illegally crossing into Georgia from Ukraine,  and is inventing a scenario about what to say if they are caught by police.

Saakashvili is under the influence of something in the video… It is impossible to take him (Saakashvili) seriously after watching the video. It is a shame and a tragedy that the man was running the country for nine years,” Garibashvili said.

Garibashvili has urged voters to actively participate in run-offs to finally ‘defeat and end the UNM, the evil force.’

GD party head Irakli Kobakhidze also stated that Saakashvili ‘is fake in everything - in the video, in his hunger strike and in his return.’

“I’m appealing for help, not for myself, but for a Georgian democracy by taking this desperate step of coming and turning myself in. I wanted both, to express solidarity to my suffering nation and awaken the consciousness of the World.” #FreeSaakashvili pic.twitter.com/eNToDIGSVe

Saakashvili claims that he returned to Georgia after eight years in political exile to help his UNM party replace the ‘pro-Russian Georgian Dream.’

He was convicted in Georgia in absentia back in 2018 for abuse of authority and was sentenced to six years in prison.

Saakashvili has also been charged with four other offences which he says are ‘politically motivated.’

He has been on hunger strike since his arrest in Tbilisi on October 1. However, the government and GD officials say that Saakashvili is receiving honey and fresh juice in Rustavi Prison No.12.