Georgian Prime Minister Irakli Garibashvili has stated that the government has no plans to reimpose coronavirus restrictions ‘because the state economy will not withstand them.’

He stated at today’s governmental meeting that the authorities have decided to ‘manage the epidemiological situation in the country rather than impose lockdown and other restrictions.’

Garibashvili has urged the public to receive vaccines and to trust scientists and not various ‘anti-vaccine fake information and Facebook pages.’

He stated that ‘practically there are no deaths’ among individuals who have been innoculated.

I wish coronavirus vaccines to be available in all Georgian villages for the vaccination process to be possible on site,” Garibashvili said.

Garibashvili stated that the state economy grew by 12 per cent in the first six months of 2021 ‘which allowed us to boost the state budget by more than one billion GEL and not to take new loans.’ 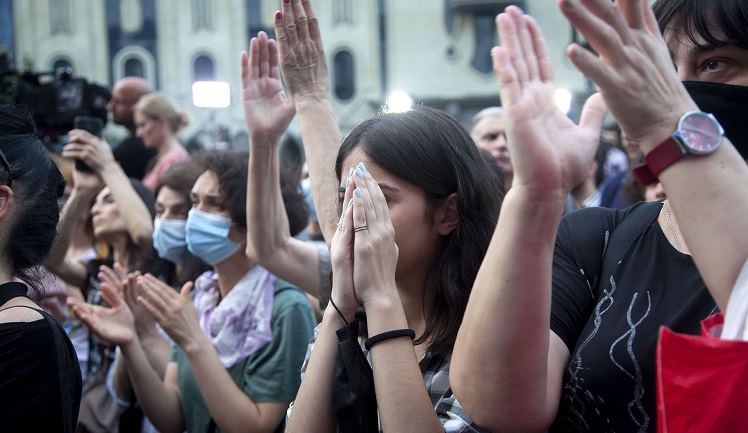 PM Garibashvili said that recent rallies in Tbilisi organised by journalists and the opposition led to the increase in new infections. Photo: Nino Alavidze/Agenda.ge.

He stated that if new restrictions are put in place the government will have to take loans ‘and later our citizens will have to pay them.’

Garibashvili said that the ‘irresponsible rallies’ over the past two weeks, connected with the death of  a cameraman who was beaten by right-wing activists during Tbilisi Pride events in early July, triggered a surge in new infections.

Georgia reported 1,264 new cases of coronavirus on the weekend.

Chinese Sinovac and Sinopharm vaccines and the German-US Pfizer vaccines are available in the country currently.