Tbilisi Contemporary Ballet and the Giorgi Aleksidze Foundation will be joining a series of international events marking 700 years since the death of Dante Alighieri when the troupe hosts its audience this month for the premiere of Beatrice, a new production inspired by the epic The Divine Comedy by the Italian philosopher and poet.

On May 19, the troupe will be at Rustaveli Theatre to present the work staged by their artistic director Mariam Aleksidze, with the dancers led by principal dancer Mariam Darchia. The production features original music composed by Dario Marianelli for Mariam Aleksidze and David Maziashvili, commissioned by the Giorgi Aleksidze Foundation.

The musical work by Marianelli - an Academy Award-winning composer - will be performed in the bill by Tbilisi State Chamber Orchestra - also known as Georgian Sinfonietta - under artistic director Giorgi Kerelashvili.

Completing the production, costume design for the dancers comes from designer Tamuna Ingorokva, an installation for the scenography has been created by artist Konstantin Mindadze, while the visual element is rounded off by graphic design from Irakli Gharibashvili. 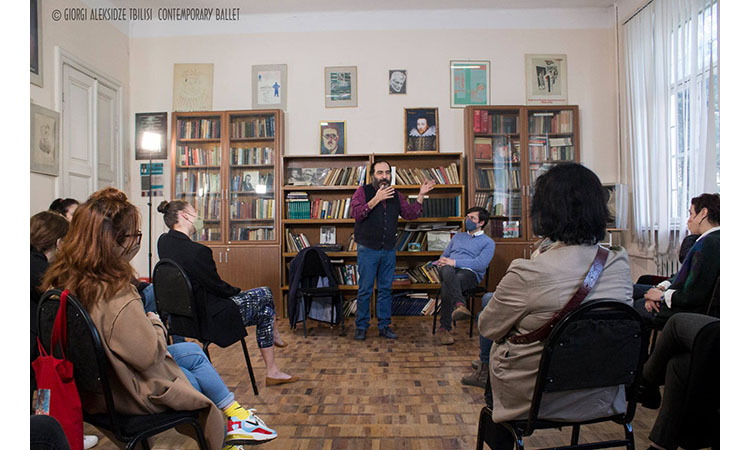 Philosopher Zaza Shatirishvili speaks in one of three public talks around Dante's work hosted ahead of the premiere. Photo via Tbilisi Contemporary Ballet.

The troupe has also hosted a series of talks - based on an idea and concept by professor Maziashvili and entitled Three Talks on Dante and The Divine Comedy - in the run-up to the premiere.

Within the cycle of lectures, professor Temur Kobakhidze has spoken about the epic poem's influence on Western literature and thought, philosopher Zaza Shatirishvili has discussed the major literary work and spirituality, and professor Levan Gigineishvili has offered his insights into the Middle Ages in connection with the poem.

The anniversary of Alighieri's death has been marked by events in Italy, where sketches for The Divine Comedy have gone on display at the Uffizi Gallery in Florence, and an international competition for symphonic compositions is held by the Camerata Strumentale Città di Prato and the Florence Philharmonic Orchestra, along with other initiatives.

In Tbilisi, the Beatrice premiere is supported by the Embassy of Italy in Tbilisi, Georgian Public Broadcaster and VTB Bank as well as Tbilisi City Hall, which worked to contribute to the formation of the contemporary troupe in 2016.

The premiere will see the troupe use the Grand Stage of Rustaveli National Theatre, located at 17 Rustaveli Avenue in the capital.