The opposition United National Movement – Strength in Unity party held an outdoor presentation of its majoritarian candidates and election programme for the upcoming country-wide parliamentary elections in the Black Sea town of Batumi yesterday.

However, despite the coronavirus-related safety recommendations not all of the participants wore face masks and social distancing was not also maintained.

UNM leader Grigol Vashadze told journalists that despite the threat from the coronavirus, this is an election period, therefore, they cannot ‘suspend the election campaigning now’.

The threat is real, but unfortunately, we are [in the period of] coronavirus and election campaign… A lot of people have come, which we neither expected, nor knew”, Vashadze said, adding that the entire responsibility ‘lays on coronavirus’.

Meanwhile, during the presentation former Georgian President Mikheil Saakashvili, who is the prime ministerial candidate of the united opposition, addressed the supporters from Ukraine.

Saakashvili said in his video address that the coronavirus is ‘a very severe disease’ which was spread ‘artificially’ by bringing ‘too many’ visitors from ‘the most infected country’.

Levan Varshalomidze, the united opposition’s majoritarian candidate in Batumi did not attend the gathering as his father died of COVID-19 yesterday, ten days after he was delivered in hospital with stroke. 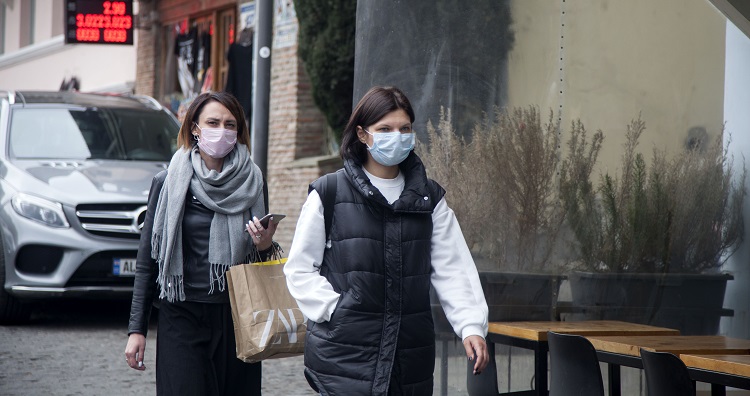 Georgian health officials have called on the citizens to wear face masks even in open areas to prevent the further spread of COVID-19, which has already claimed lives of 128 individuals. Photo: Nino Alavidze/Agenda.ge

Calling on the society to make their 'own judgements', Tbilisi Mayor Kakha Kaladze said the country has to overcome ‘two viruses’ now.

How can a singe political group take responsibility of a country when it does  not share responsibility even at a rally?” Kaladze said, adding that nothing happens in politics ‘unintentionally’.

Parliament Speaker Archil Talakvadze also added that amid the 'hard work' of health professionals in Adjara region, UNM’s large scale rally - disobeying the safety measures - was ‘an act against the country and the society’.

Vice Speaker Mamuka Mdinaradze wrote on his Facebook page as well that the UNM has 'again confirmed' that they are 'standing on the side of the virus'.